Deploying the First Iteration of Our Business Application

In this group of lectures we will introduce you to the Pizza Time business and system requirements. Pizza Time requires a simple ordering solution that can be implemented quickly and with minimal cost, so we will do a hands deployment of version 1.0 of our solution. To achieve that we are going to use a single region and deploy an application using AWS Elastic Beanstalk. We will implement a simple database layer that will be capable of delivering on these initial requirements for Pizza Time.

It turns out that the Pizza Time business is a success and the business now wants to target a global audience. We discuss and design how we can increase the availability of our initial Pizza Time application, then begin to deploy V2 of Pizza Time - a highly available, fault-tolerant business application.

So first, Pizza Time is a success.

People enjoy the application and they enjoy the pizza even more, and Pizza Time has started to open a new franchise in America, but they are experiencing so much success that they decided to open franchises all over the continent. So they are opening a franchises in Canada, in Mexico, in Venezuela, in Brazil.

And what is happening is, they are starting to experience some problems with the application because the main issue here is that it's only one application for everybody. And although we configured an Auto Scaling group for our application to handle traffic, that's really not enough for an application this big. So we need to change this infrastructure.

Currently, we have the Pizza Time domain, sending all the requests to a single load balancer. And we have a few instances running on an Auto Scaling group, and although it can scale up and down, that's also not enough. We are using instances “m3.medium” and they are not enough for the size of the application. And the same applies for the database. We are using the “m3.medium” database. Also, for RDS.

But, all the right requests are going to be still sent to the main database. So, we can offload a little bit the traffic of our database. But, we still have some latency when writing new things to our database. But that will be acceptable for us.

Also, our Pizza Time application is actually an angular app. It's written in AngularJS and it is basically a bunch of HTML and JavaScript files.

So, what we can do is we can host all these files in an S3 bucket and we can create a web distribution on CloudFront to serve our app. So our page will be served through CloudFront and only the API calls will be forwarded to the regions. And we will configure route 53 to create some latency-based record sets to forward the requests to our APIs.

So I will kind of divide the Deployment and Provisioning section using the other main domains. So we are going to start deploying things. And I will try to create shorter videos with a single topic per video so you can go back to a particular video if you have some doubts on that part.

But I will continue deploying and provisioning things, but also talking about data management. We are going to create some backups for our application, talking about security and networking. So don't worry if after the Deployment and Provisioning section you don't feel that you know this first topic, because you are going to divide all this content between the next lectures. 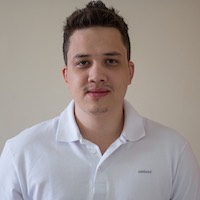