In this article, we’ll cover how to set up an Azure Databricks cluster and how to run queries in an interactive notebook. However, this article only scratches the surface of what you can do with Azure Databricks. If you would like to learn more, including how to create graphs, run scheduled jobs, and train a machine learning model, then check out my complete, video-based Running Spark on Azure Databricks course on Cloud Academy.

Watch this short video taken from the course to get an idea of what you’ll learn:

Apache Spark is an open-source framework for doing big data processing. It was developed as a replacement for Apache Hadoop’s MapReduce framework. Both Spark and MapReduce process data on compute clusters, but one of Spark’s big advantages is that it does in-memory processing, which can be orders of magnitude faster than the disk-based processing that MapReduce uses. There are plenty of other differences between the two systems, as well, but we don’t need to go into the details here.

Not only does Apache Spark handle data analytics tasks, but it also handles machine learning. It has a library called MLlib that includes a variety of pre-built algorithms, such as logistic regression, naive Bayes, and random forest. At the moment, it doesn’t include neural networks. However, you can still create neural networks on Spark using other machine learning frameworks, such as TensorFlow.

In 2013, the creators of Spark started a company called Databricks. The name of their product is also Databricks. It’s basically a managed implementation of Apache Spark in the cloud, so you don’t have to worry about building clusters yourself. It also has a user-friendly interface for running code on clusters interactively.

Microsoft has partnered with Databricks to bring their product to the Azure platform. The result is a service called Azure Databricks. One of the biggest advantages of using the Azure version of Databricks is that it’s integrated with other Azure services. For example, you can train a machine learning model on a Databricks cluster and then deploy it using Azure Machine Learning Services.

Now let’s see how to set up an Azure Databricks environment. You need to perform two tasks:

In the Azure portal, search for databricks. When it comes up, click on it. 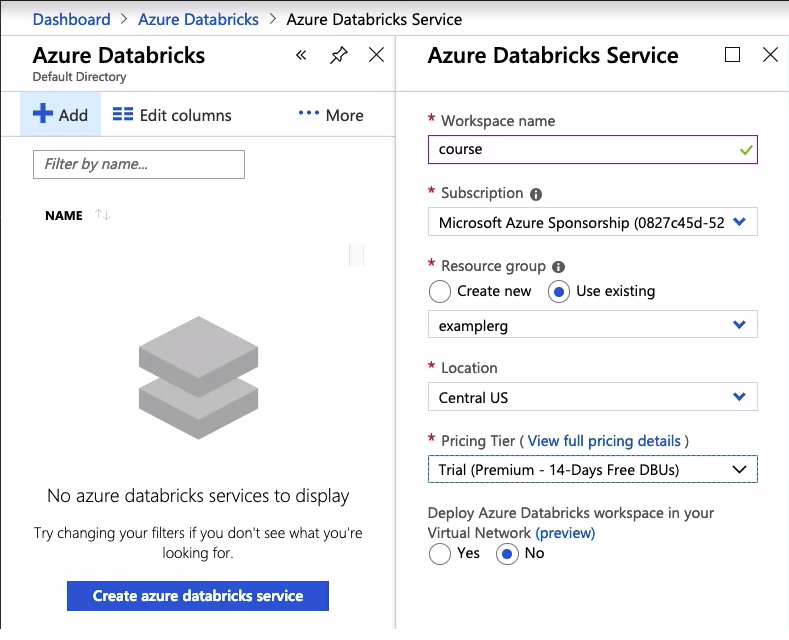 The Workspace name can be anything. It doesn’t have to be globally unique. Let’s call it course. Then, either create a new resource group to put it in or use an existing one. For the pricing tier, choose either Trial or Standard.The Trial tier is free for 14 days.

When Azure is finished creating the workspace, click on it. Then, when you click the Launch Workspace button, it will take you to the Databricks portal, which is separate from the Azure portal. Alright, now we can create a cluster. Click Create Cluster. Then you’ll see this screen.

You can give the cluster any name you want. Let’s call it spark. The Cluster Mode can be either Standard or High Concurrency. We’re only going to run one job at a time, so leave it on Standard.

For the Databricks Runtime Version, you can leave it with the default, which might be different for you than this version. You can also leave the Python version with the default.

Make sure the Terminate after __ minutes of inactivity box is checked. It can be expensive to run a cluster, so you’ll want to automatically shut the cluster down if it’s been inactive for a while. The default is 120 minutes, but you can change it to something lower, like 60, so it will shut down after being idle for a shorter period than two hours.

Under Worker Type, you can see that there are lots of options for what kind of virtual machines to put in the cluster. Leave it on the default type. You’ll notice that the cluster will always have a minimum of two workers and can autoscale up to a maximum of eight workers.

OK, now click Create Cluster. It will take a little while to finish.

Once your cluster is ready, you can execute code on it. You can do that by using a notebook. If you’ve ever used a Jupyter notebook before, then a Databricks notebook will look very familiar.

Let’s create one so you can see what I mean. The notebook will reside in a workspace, so click Workspace, open the dropdown menu, go into the Create menu, and select Notebook. 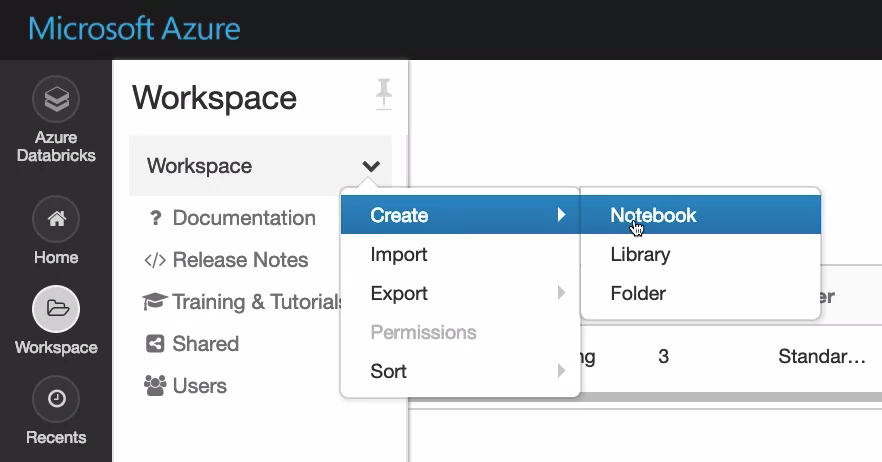 Let’s call it test. For the language, you can choose Python, Scala, SQL, or R. We’re going to run some simple queries, so select SQL. 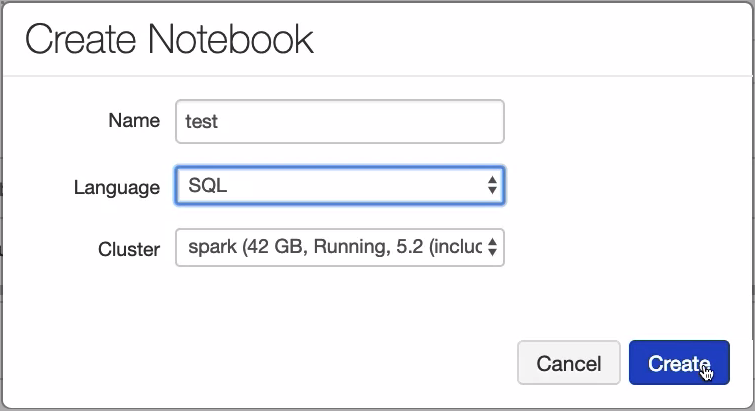 A notebook is a document where you can enter some code, run it, and the results will be shown in the notebook. It’s perfect for data exploration and experimentation because you can go back and see all of the things you tried and what the results were in each case. It’s essentially an interactive document that contains live code. You can even run some of the code again if you want.

Alright, let’s run a query. Since we haven’t uploaded any data, you might be wondering what we’re going to run a query on. Well, there’s actually lots of data we can query even without uploading any of it. Azure Databricks is integrated with many other Azure services, including SQL Database, Data Lake Storage, Blob Storage, Cosmos DB, Event Hubs, and SQL Data Warehouse, so you can access data in any of those using the appropriate connector. However, we don’t even need to do that because Databricks also includes some sample datasets.

To see which datasets are available, you can run a command in the command box. There’s one catch, though. When we created this notebook, we selected SQL as the language, so whatever we type in this command box will be interpreted as SQL. The exception is if you start the command with a percent sign and the name of another language. For example, if you wanted to run some Python code in a SQL notebook, you would start it with %python and it would be interpreted properly.

Similarly, if you want to run a filesystem command, then you just need to start it with %fs. To see what’s in the filesystem for this workspace, type: %fs ls

The ls stands for list and will be familiar if you’ve used Linux or Unix.

To execute the command, you can either hit Shift–Enter, or you can select Run cell from this menu. I recommend using Shift–Enter because not only is that faster than going to the menu, but it also automatically brings up another cell for you so you can type another command. 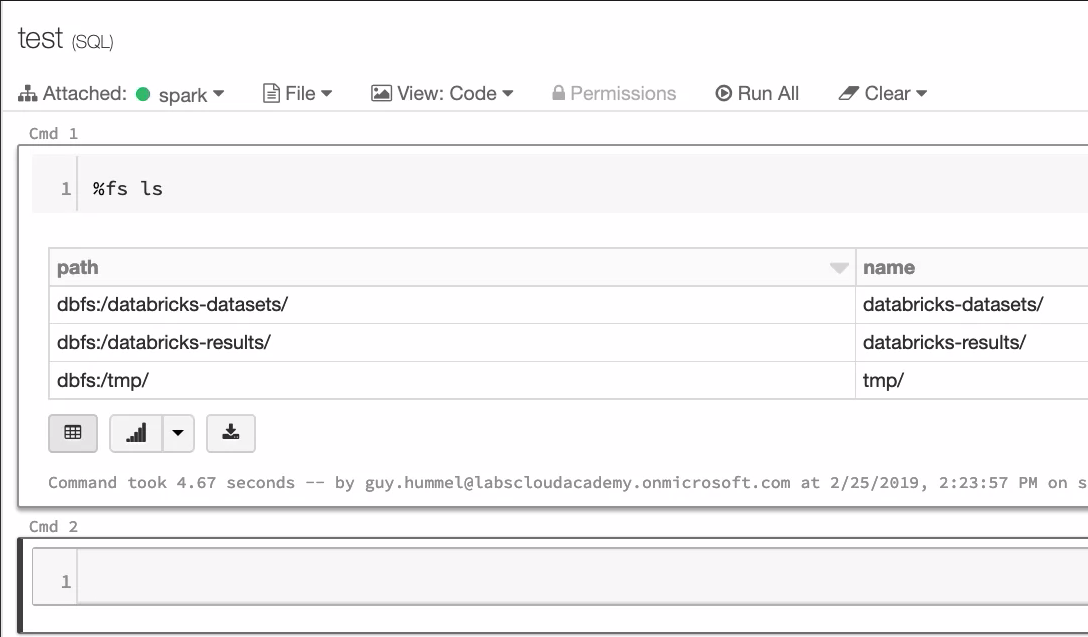 You’ll notice that all of the folders start with dbfs (Databricks File System), which is a distributed filesystem installed on the cluster.You don’t have to worry about losing data when you shut down the cluster, though, because DBFS is saved in Blob Storage.

The sample datasets are in the databricks-datasets folder. To list them, type:

The one we’re going to use shows what the prices were for various personal computers in the mid-1990s. Use this command to see what’s in it:

The head command shows the first lines in a file, up to the maxBytes you specify, which is 1,000 bytes in this case. If you don’t specify MaxBytes, then it will default to about 65,000 bytes.

The first line contains the header, which shows what’s in each column, such as the price of the computer, its processor speed, and the size of its hard drive, RAM, and screen.

To run a query on this data, we need to load it into a table. A Databricks table is just an Apache Spark DataFrame, if you’re familiar with Spark. You can also think of it as being like a table in a relational database.

To load the csv file into a table, run these commands:

The first command checks to see if a table named computers already exists, and if it does, then it drops (or deletes) it. You don’t have to do this, of course, because you haven’t created any tables yet, but it’s a good idea to do it. Why? Because if you wanted to run the code in this cell again, then the table would already exist, so you’d get an error if you didn’t drop the table first.

The second command creates the table. Note that it says there’s a header in the file. By setting header to true, it will name the columns for us, so we won’t have to do that ourselves. The inferSchema option is even more useful. It figures out the data type of each column, so we don’t have to specify that ourselves either.

To see what’s in the table, run a SQL query. The simplest command is:

If this were a really big table, then you might not want to run a select * on it since that reads in the entire table, but it’s okay in this case. 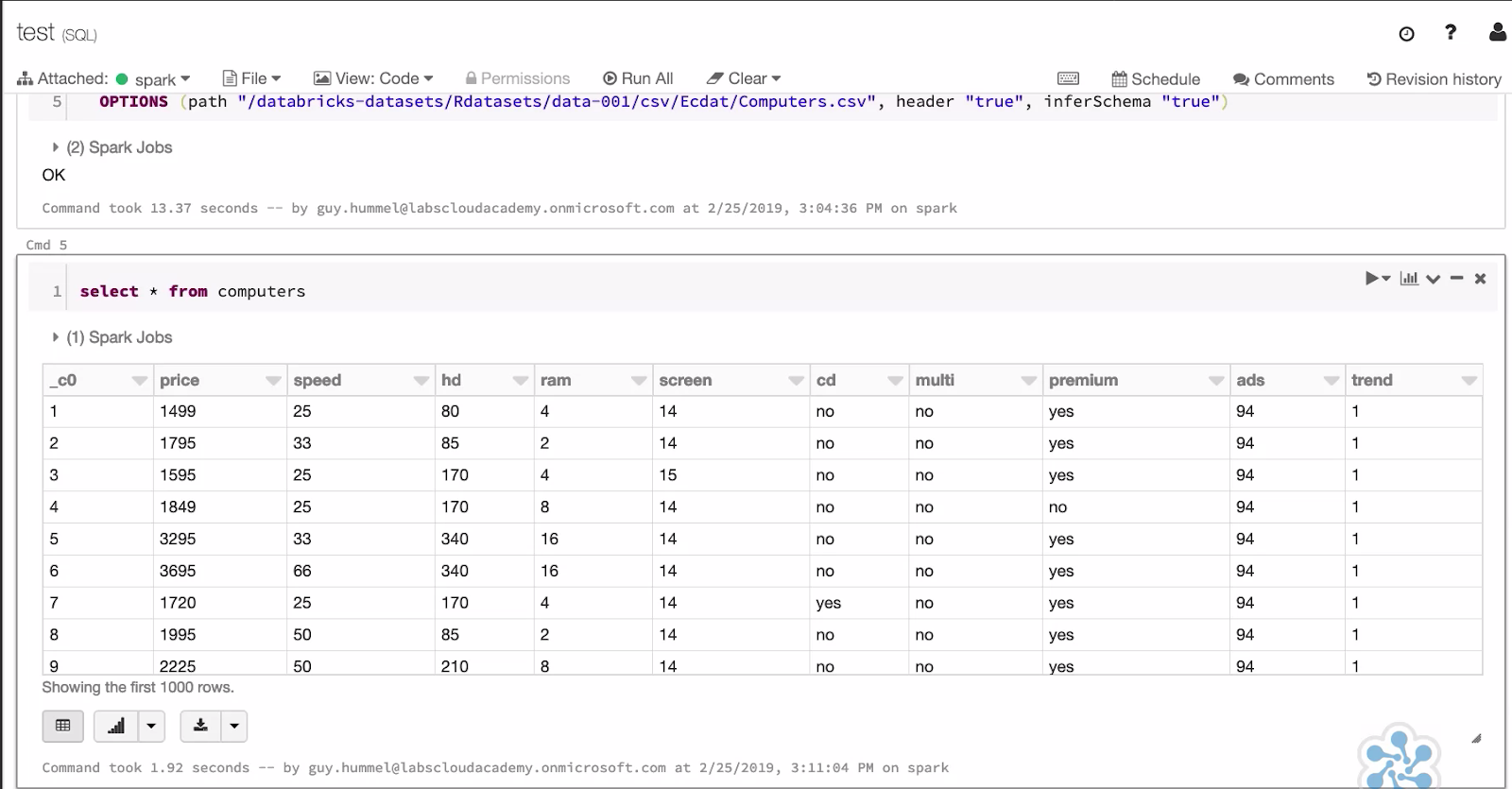 This is the same data we saw when we ran the head command, but now it’s in a nicely formatted table. 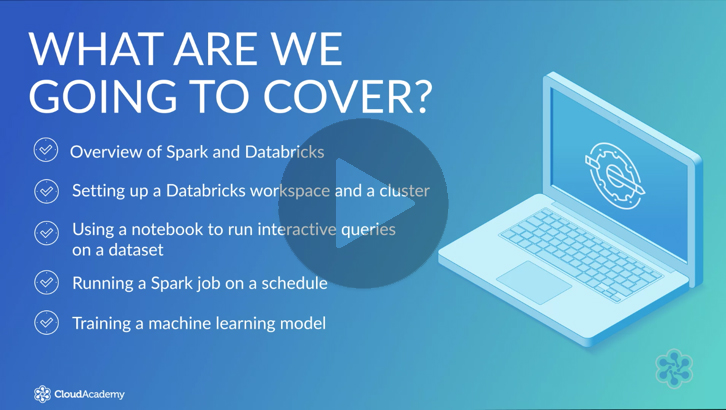