What is Ansible? Ansible is an open-source IT automation engine, which can remove drudgery from your work life, and will also dramatically improve the scalability, consistency, and reliability of your IT environment. We’ll start to explore how to automate repetitive system administration tasks using Ansible, and if you want to learn more, you can go much deeper into how to use Ansible with Cloud Academy’s new Introduction to Ansible learning path.

What is Ansible and what can it automate?

You can use Ansible to automate three types of tasks:

Ansible can automate IT environments whether they are hosted on traditional bare metal servers, virtualization platforms, or in the cloud. It can also automate the configuration of a wide range of systems and devices such as databases, storage devices, networks, firewalls, and many others.

The best part is that you don’t even need to know the commands used to accomplish a particular task. You just need to specify what state you want the system to be in and Ansible will take care of it. For example, to ensure that your web servers are running the latest version of Apache, you could use a playbook similar to the following and Ansible would handle the details.

The line in the above playbook that actually installs or updates Apache is “yum: name=httpd state=latest”. You just specify the name of the software package (httpd) and the desired state (latest) and Ansible does the rest. The other tasks in the playbook update the Apache config file, restart Apache, and enablea Apache to run at boot time. Take a read at one of our previous blog posts on how to build Ansible playbooks.

There are many other IT automation tools available, including more mature ones like Puppet and Chef, so why would you choose Ansible? The main reason is simplicity. Michael DeHaan, the creator of Ansible, already had a lot of experience with other configuration management tools when he decided to develop a new one. He said that he wanted “a tool that you could not use for six months, come back to, and still remember.”

DeHaan accomplished this by using YAML, a simple configuration language. Puppet and Chef, on the other hand, use Ruby, which is more difficult to learn. This makes Ansible especially appealing to system administrators.

DeHaan also simplified Ansible deployment by making it agentless. That is, instead of having to install an agent on every system you want to manage (as you have to do with Puppet and Chef), Ansible just requires that systems have Python (on Linux servers) or PowerShell (on Windows servers) and SSH.

What is Ansible? A New Learning Path

Although Ansible is easier to learn than many of the other IT automation engines, you still need to learn a lot before you can start using it. To help you with this, Cloud Academy has released its Introduction to Ansible learning path.

Hands-on practice is critical when learning a new technology, so we have included two labs in the learning path:

Finally, you can test your knowledge of Ansible by taking the quizzes.

Watch this short video, taken from the Getting Started with Ansible Course, where we take a look at the most common Ansible use cases.

Whether you need to make your life easier by automating your administration tasks or you’re interested in becoming a DevOps professional, Ansible is a good place to start. Learn how to streamline your IT operations with Introduction to Ansible. 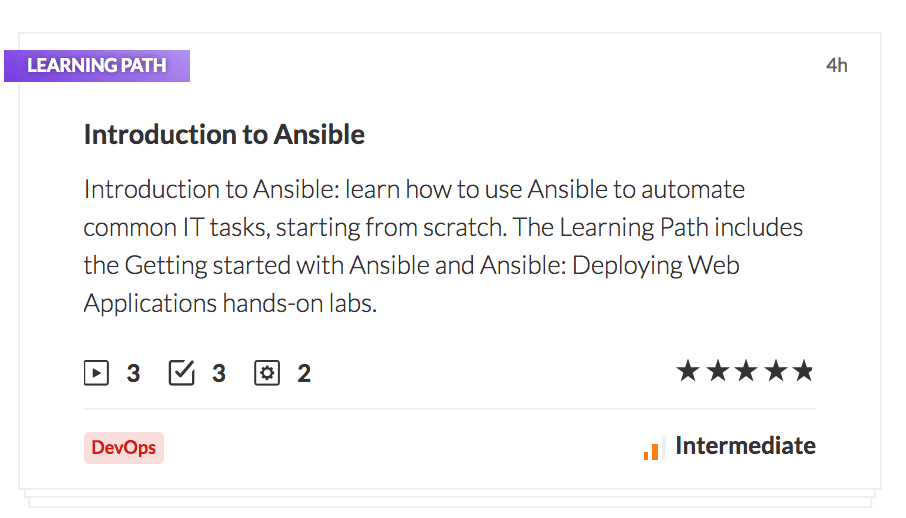