From its humble origins, Rackspace has grown into a global company with more than 200,000 customers in 120 countries and $1.8 billion in annual revenue. They have more than 5700 employees (called rackers) on four continents. However, Rackspace cloud servers have been facing aggressive competition from the big players: AWS, Azure, and Google, and even from some of the smaller public clouds that populate various niche markets. That competition, along with management changes and a sinking stock price have raised questions about Rackspace’s ability to stay in the race and survive the public cloud war.

Can Rackspace rely on some unique selling points while fighting off competition from both the giants and niche public cloud providers?

What do Rackspace cloud servers have going for them?

Two things: customer support and OpenStack. Each of these adds its own significant value. 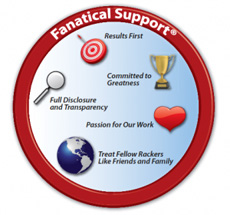 Rackspace prides itself on its “Fanatic Support” – a term coined back in 1999 by VP of Customer Care, David Bryce, to capture the essence of the company’s customer service philosophy. While not everyone in the industry will necessarily agree on the ultimate quality of the results, Rackspace aims to offer its customers more than “the basic break-fix support.”

Fanatical support is meant to make Rackspace’s team an “extension to the customer’s team,” providing customers with 24/7 access to the knowledge and experts they’ll need to get their desired results. Rackspace trains and evaluates their employees based on criteria designed for Fanatical Support and customers’ satisfaction and loyalty.

“Fanatical Support” is a product of Rackspace’s early focus on providing managed cloud services. Rackspace cloud servers deliver better value, the company believes, because the “highest performance and cost-efficiency come when you combine infrastructure with specialized expertise.” Relying on managed services can relieve you of some of the responsibility for infrastructure monitoring.

Rackspace, with NASA, is the founder of the open source project OpenStack, and the operator of the largest OpenStack public cloud. Enterprises that choose to use OpenStack on their Rackspace cloud servers will, by design, avoid the potential costs of vendor lock-in, because they’re always free to migrate to some other platform or even to their own data centers. And that’s no small consideration.

Building on OpenStack, Rackspace plans to position itself as number one in the hybrid cloud market. They believe that the traditional multi-tenant public cloud approach used by the giant public clouds is not necessarily an enterprise’s best choice.

Rackspace vs the giants

AWS, with their massive economies of scale and near-constant new feature rollouts, has announced price reductions tens of times since their launch in 2006, and Google and Azure are not far behind. Practically speaking, Rackspace simply can’t expect to go head-to-head with the Big Three on either price or features. Betting on Rackspace becoming a player in the mainstream general cloud computing market would, therefore, not be particularly wise. Whatever space they do manage to carve for themselves will, therefore, have to leverage their two core strengths.

“Niche cloud providers” are cloud providers who, like Rackspace, lack the resources and infrastructure to compete in the open cloud market. Niche providers whose business models overlap with Rackspace include CloudSigma (who, broadly speaking, wish to be known for better performance, simpler hardware setups, and flexibility), Digital Ocean (developer-focused and super-fast provisioning), ProfitBricks (the InfiniBand high-speed network connectivity), and SoftLayer (integration and automation).

Rackspace cloud servers run on a mature and reliable platform, but they face stiff competition from the industry. The company really has no choice but to focus on their niche and differentiate themselves through customer service and specialization (OpenStack). Joining the ongoing price war would definitely not end well for Rackspace, and it might well put them out of the race altogether.

In my opinion, the survival of Rackspace as an IaaS public cloud will depend on keeping their customers addicted to their “Fanatical Support” and on successfully marketing their OpenStack and hybrid cloud philosophy. Rackspace is already known for some SaaS cloud services like Microsoft Exchange, so there’s promise in focusing more on SaaS and PaaS. Niche public cloud providers compete with Rackspace cloud servers but they don’t greatly threaten their existing position. However over time they, too, might reduce Rackspace’s piece of the public cloud pie.