Security is IT’s top spending priority according to the 2017/2018 Computer Economics IT Spending & Staffing Benchmarks report*. Given the frequent changes and updates in vendor platforms, the pressure is on for IT teams who need to keep their infrastructures and data secure. As breaches and attacks become more sophisticated, teams will need to get creative to stay ahead of the next threat, and this includes putting yourself in a hacker’s shoes to see your system and its vulnerabilities in a new light. Following our previous hacking lab using VirtualBox and Vagrant, in this post, I will focus on how to use the lab to practice SQL injection attacks. SQL injection is often used by hackers to exploit security vulnerabilities in your software to ultimately gain access to your site’s database.

As with our previous lab, I recommend downloading and using the Kali Linux VM as your attack platform.

So, fire up your lab, set the difficulty to medium, and head to the SQL injection page! 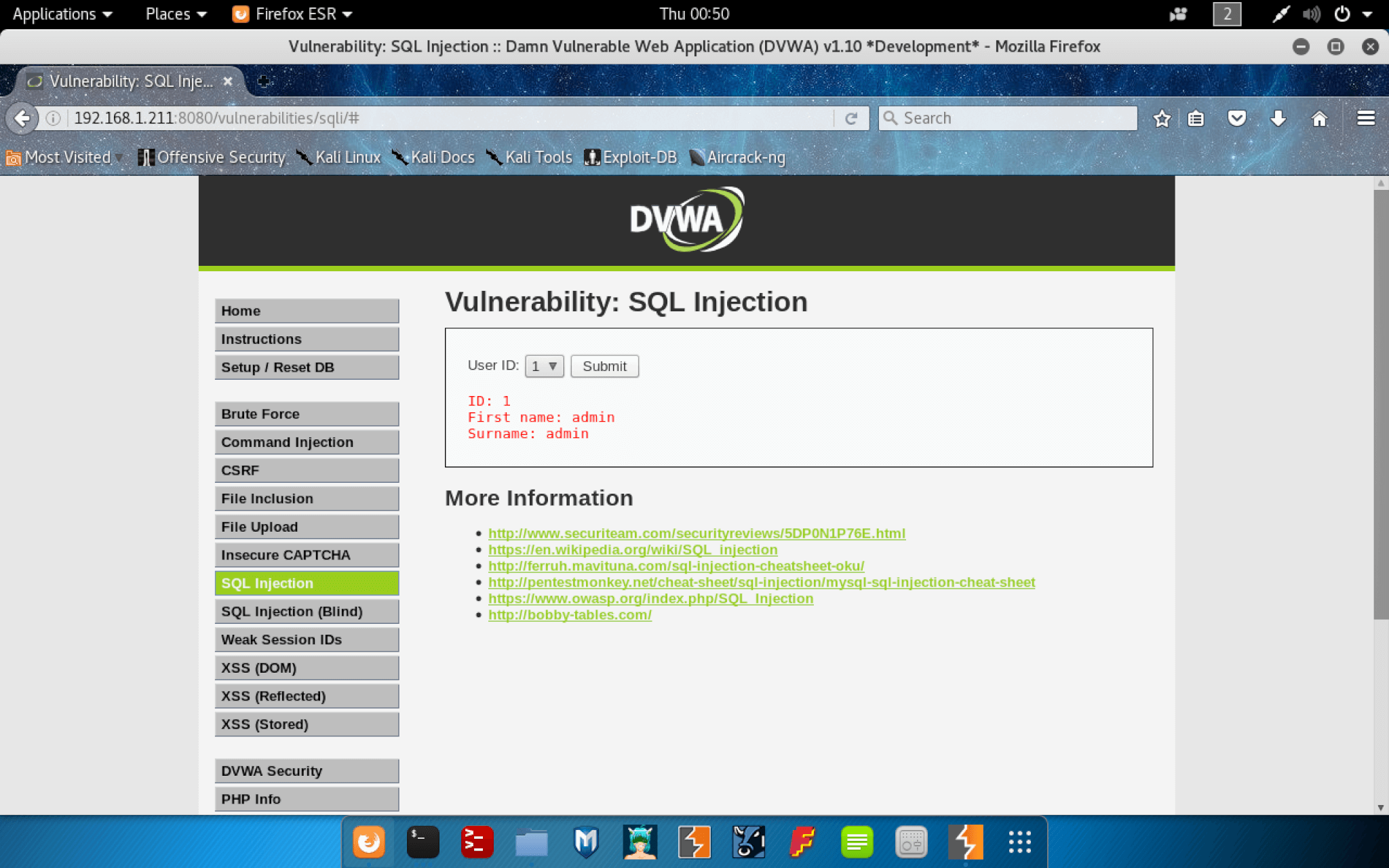 On the SQL injection page, you are presented with a User ID number selection input and a submit button.

Clicking submit returns some information about the user with the user ID selected in the input. In the example here, it’s for the admin user with ID of 1. 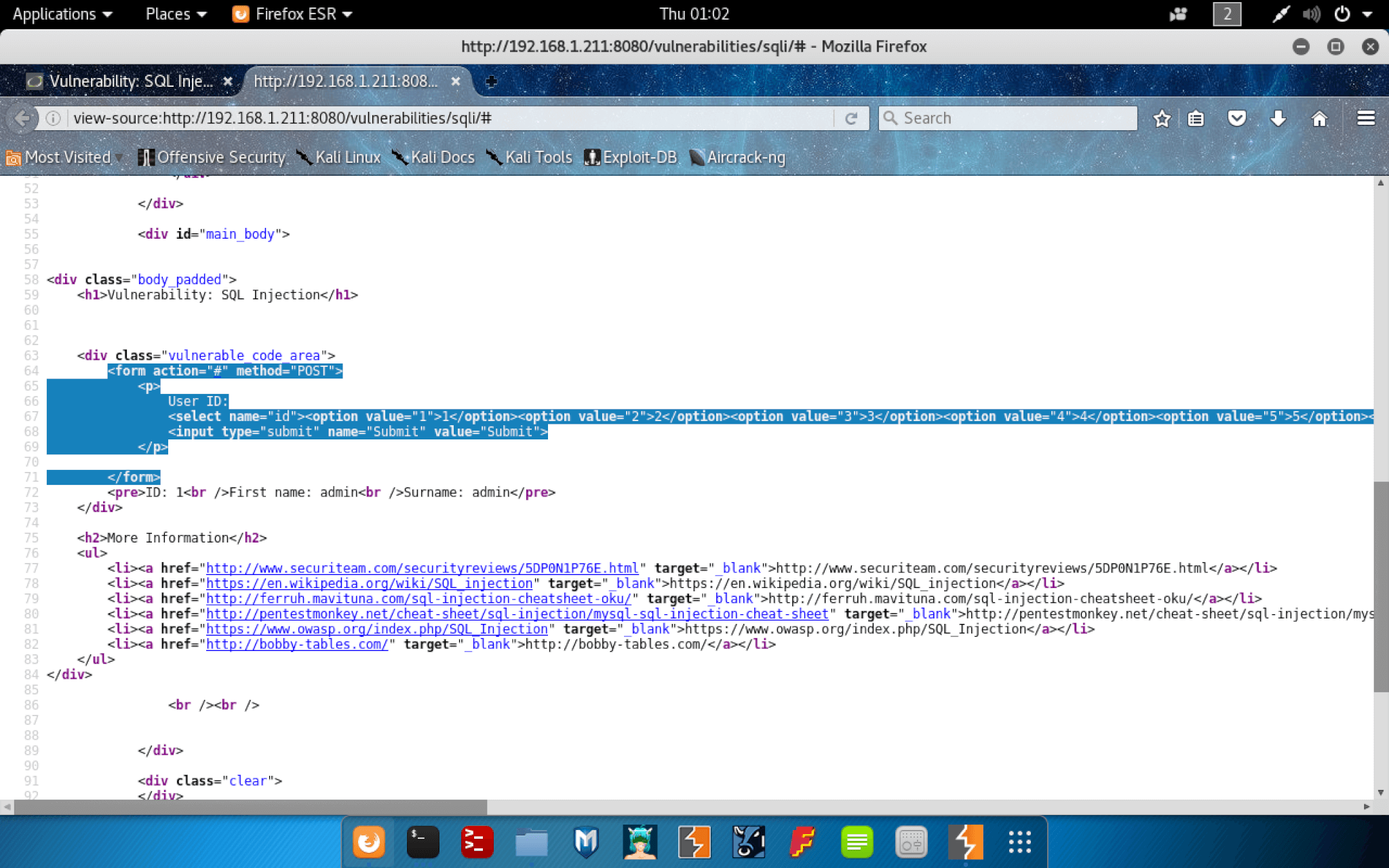 Check out the HTML source for the page by right-clicking anywhere on the page and select “view source.” Scroll down until you find the form element.

Here’s how this page works: When you select a value in the drop-down menu and submit it, the value for the selected item is sent as a POST request to the current page.

Depending on who you ask, the great or lousy thing about websites is that there isn’t a way to prevent users from sending whatever data they want.

For this reason, developers should consider all data from the browser to be malicious. This includes things like cookie values and request headers, as well as inputs. I like to consider the user interface as a nice way to use the site, though not a requirement. 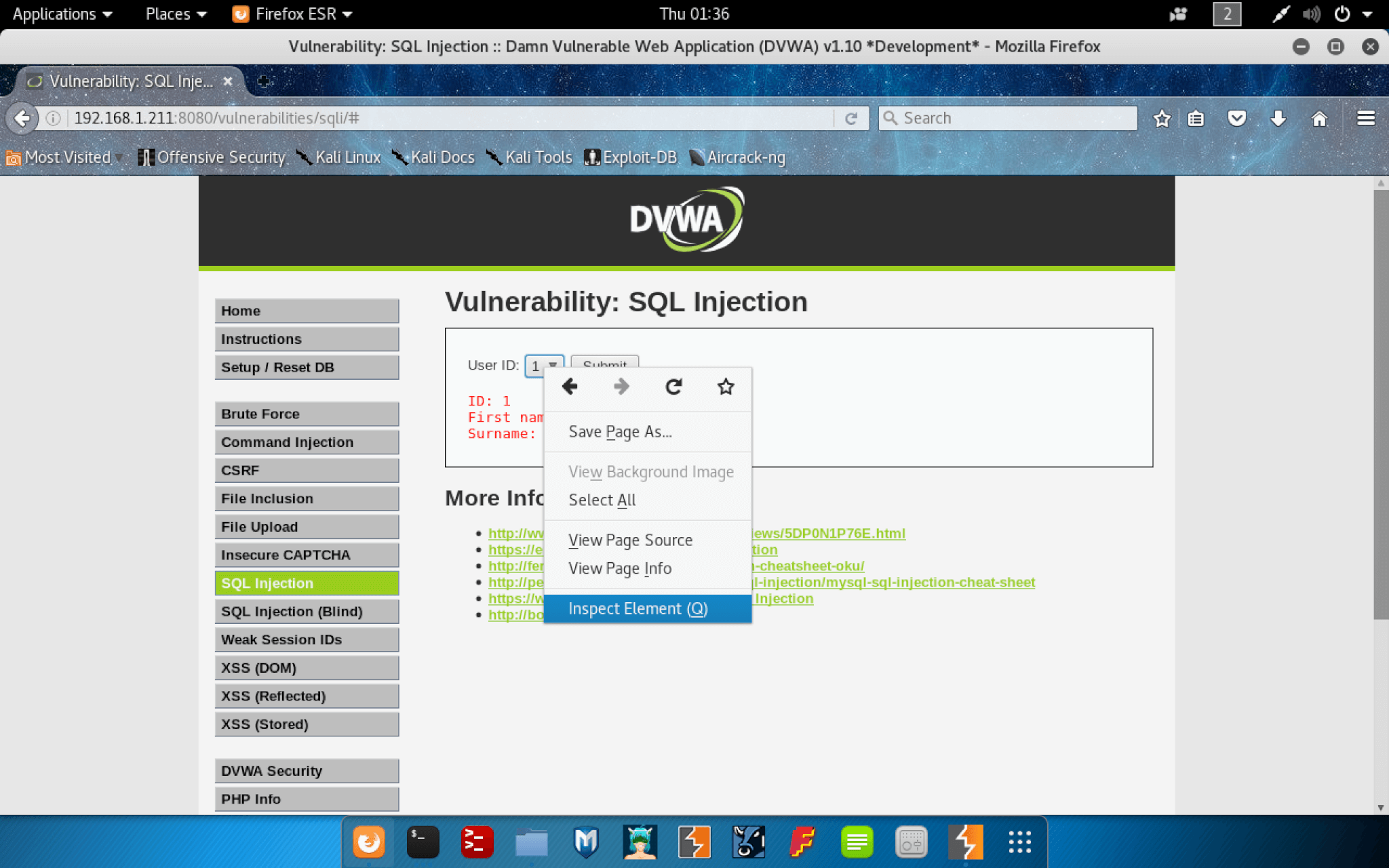 There are a lot of different ways that you can edit a value posted to a web page. One way is to use the developer tools built into the browser.

Try it out for yourself. Right-click on the input and select “Inspect Element.” 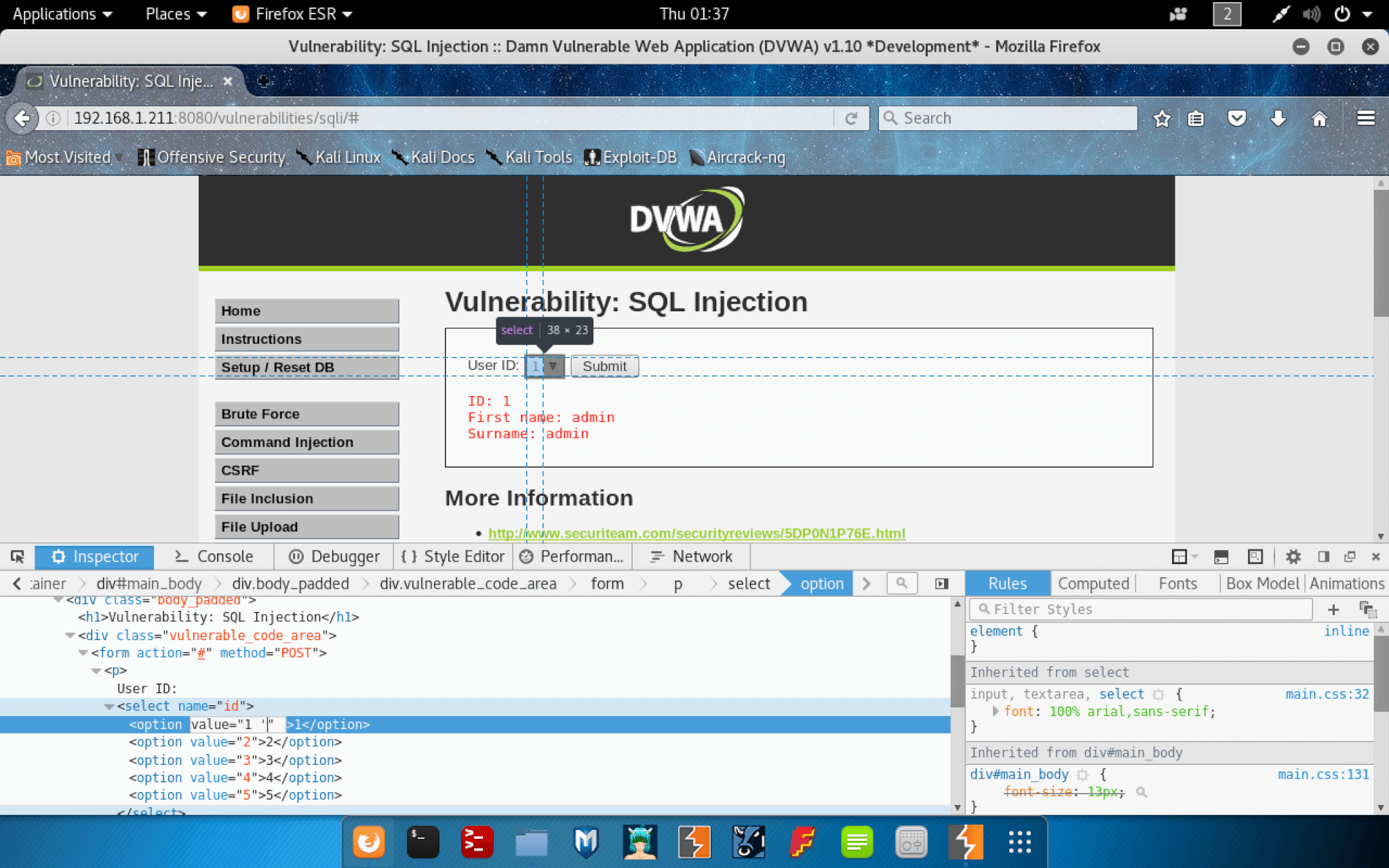 Double-click on the “1” in the value attribute for the first option in the select element. Edit the value by adding a space and then a single quote after the 1.

Once you’ve changed it, make sure the drop-down is set to 1 and click submit. Now, instead of sending a 1  it will send 1 ‘  which should throw an error. Because single quotes are part of the SQL syntax, adding one should throw off the query. 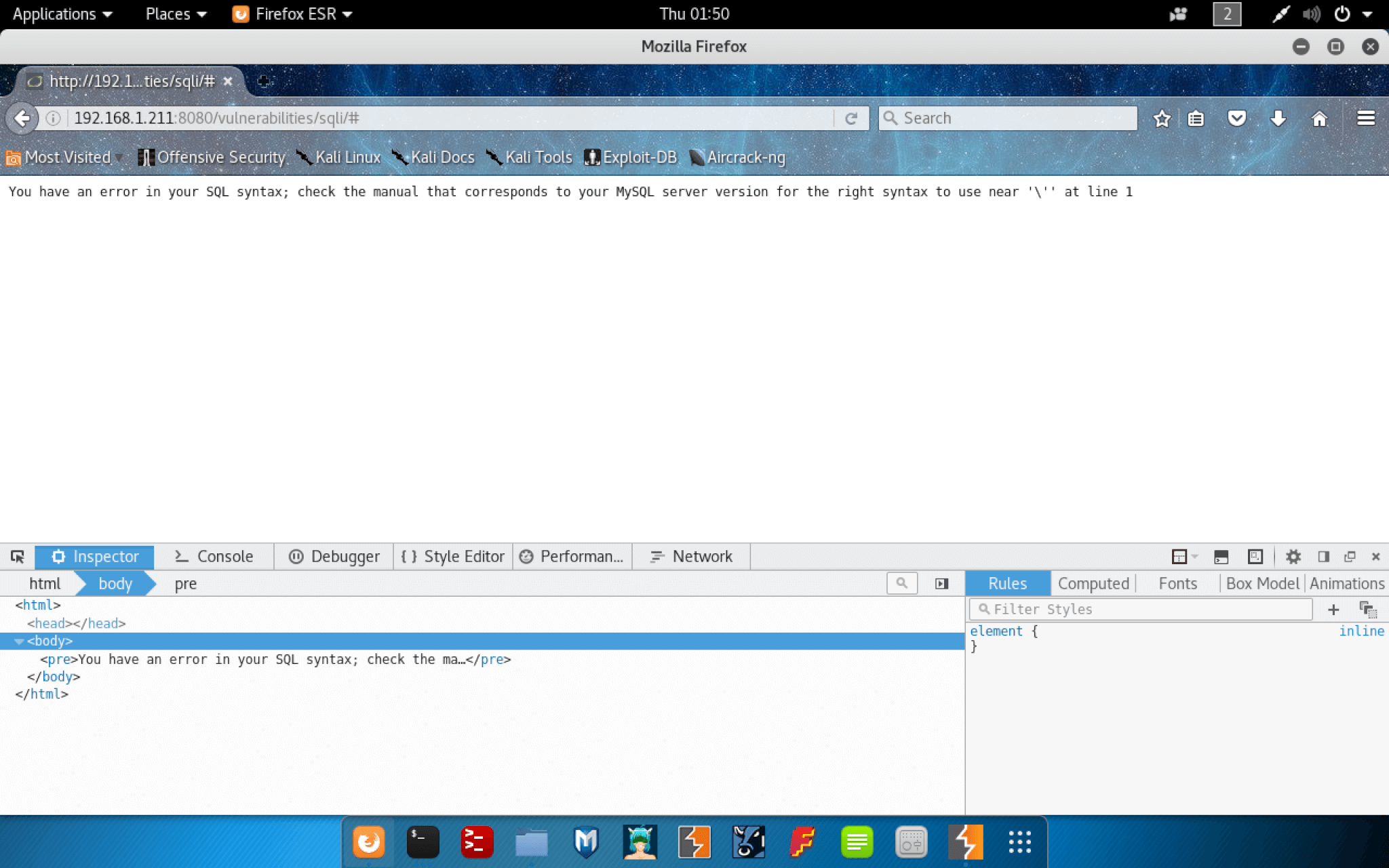 In this case, the error is returned for us to see. While this is not a best practice for developers, it is great for attackers.
The error here is basically saying that the change made to the posted value broke the query. Knowing this is your starting point for figuring out how to inject your own SQL.

Knowing what SQL to inject will initially be difficult. However, the more you learn about SQL and application development, the easier it will become.

For this example, my guess is that the query being executed is something like the following:

Why? I can only search for one record at the time; however, there are three fields displayed. The fields are for the user’s first name, last name, and the ID. Also, it’s a common SQL practice to use lower snake case for column names.

Another common practice is to have the table name in front of the ID. In this case, the ID column might be something like “user_id.” However, I’m not ready to look at the source code to find out.

In this case, the 1  in the “where” clause is the ID that’s being passed in from the POST body. This means that we can include the ID and some SQL, and it will be executed.

To start testing this, edit the value attribute for the option element again, setting it to 1 OR 1=1  and then submit it. If the query is similar to how I suspect it will look, then the end result will be like the following:

The where clause here will evaluate true for all rows since the number 1 will always equal 1. Regardless of whether this query works or fails, it should provide some insight into both the application and the query design.

If multiple users are displayed on the page, then I know that there isn’t a limit of one. I’ll also know that the app just loops over all of the returned records and displays them. 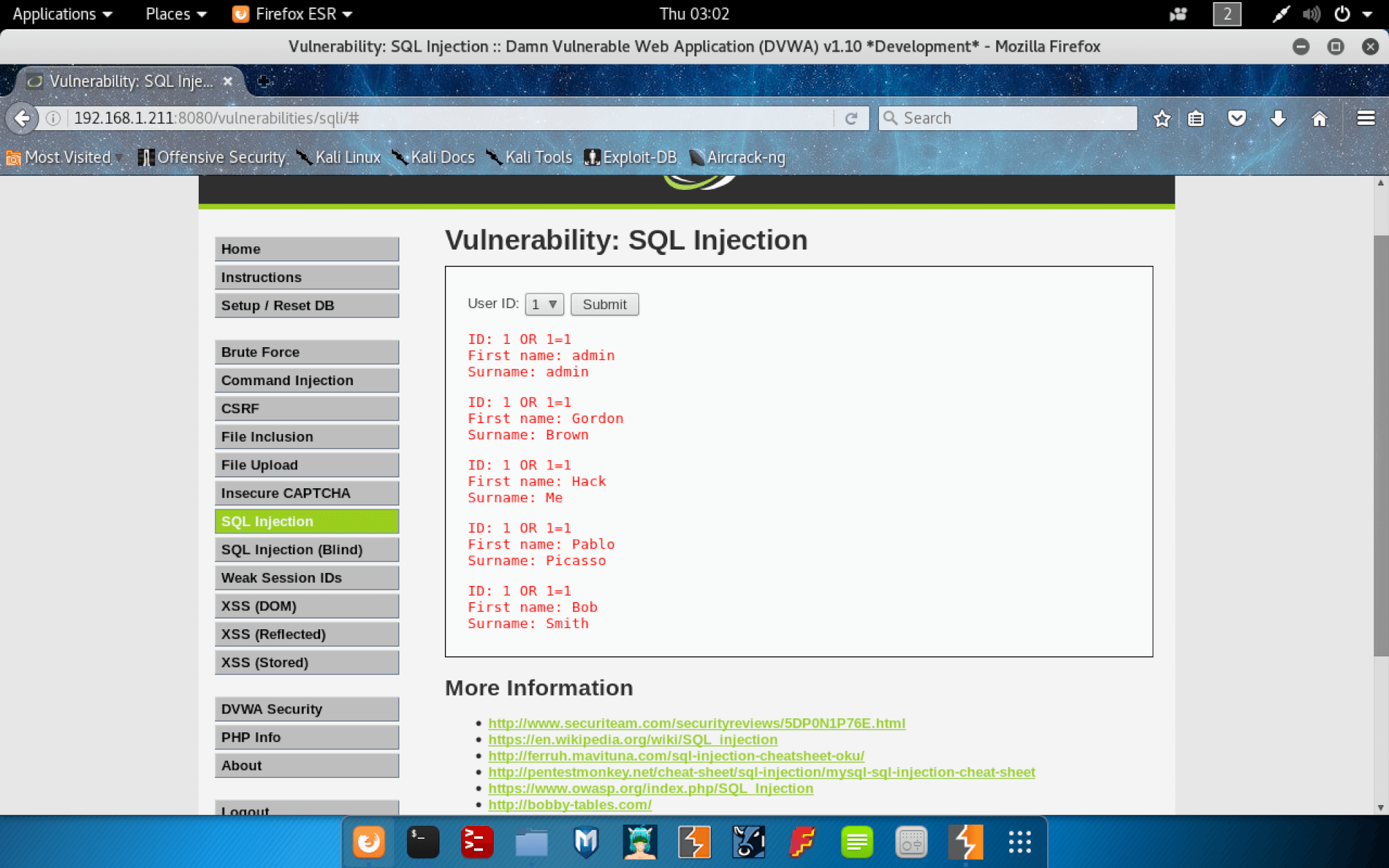 The results are interesting because there are multiple records that are being displayed. This is often just a bit easier to exploit because regardless of how many records are returned, they’ll be looped over and displayed.

Also, the ID for each record shows the value that I posted, which means that the query probably isn’t returning the ID. Now, it’s time to try and paint a clearer picture of the SQL query. To do that, set the value of the option element to 1 UNION ALL SELECT 1, 2

If this works, the query will return just two columns. If this fails, it should show an error indicating that the column count doesn’t match. 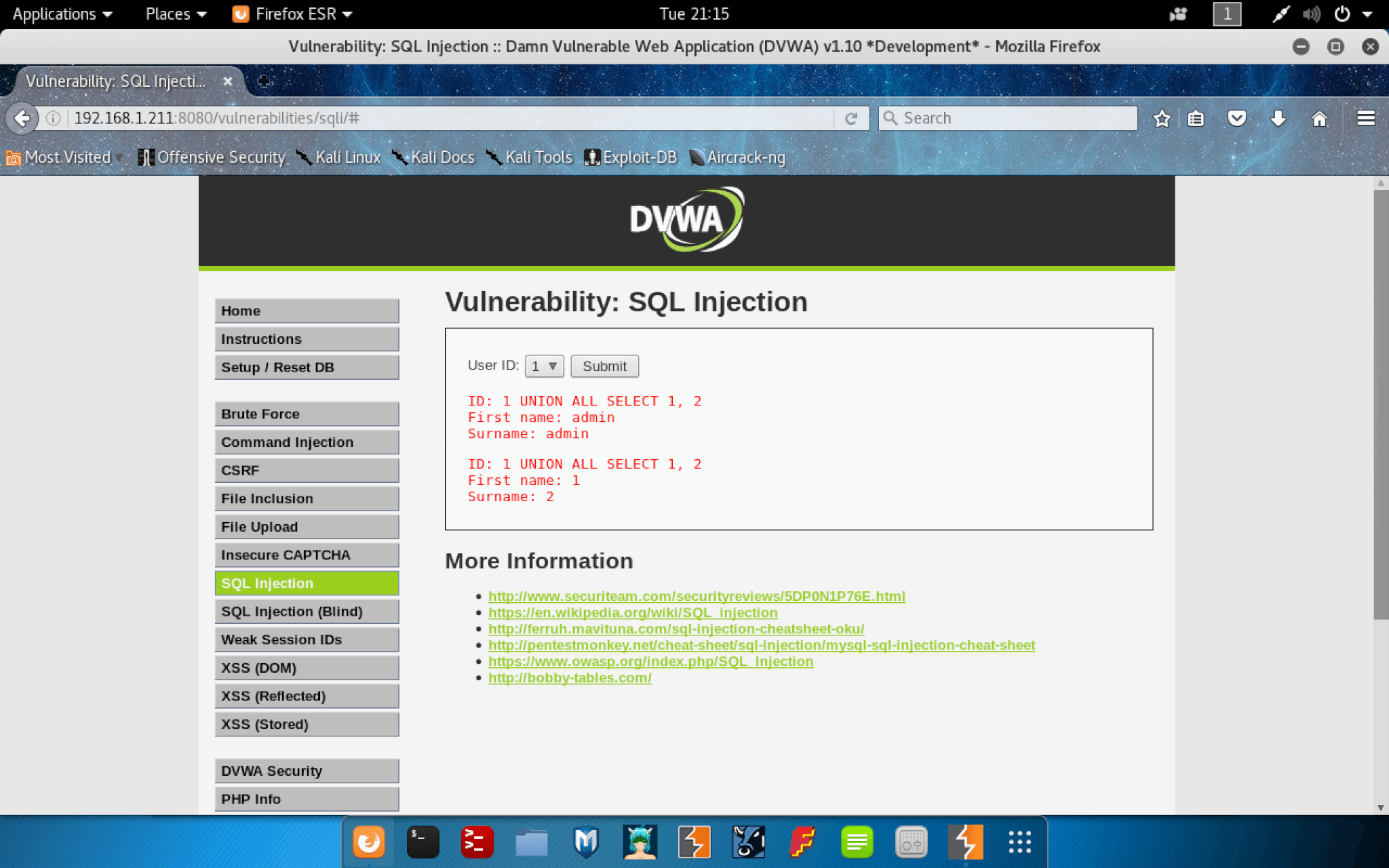 It worked! This means that the query is returning two columns. This helps define the constraints, so it will make it easier for us to start creating queries.

The ID isn’t being fetched from the query, there doesn’t seem to be a limit, and there are only two columns. Therefore, my new hypothesis is that the query now looks something like this:

Knowing this, I want to try and list all of the user tables to get an idea of what other data might be available. Set the value of the option element to:

The error message returned wasn’t what I expected. Since I know the query should work, this makes me think that the posted ID is being passed through some function to sanitize the input.

If the returned value is being sanitized, this means that any query with a single quote will fail. That’s only a problem for those who lack creativity.

I’ve created a crude bit of Python to be executed on the command line that will take a word as an argument and convert its ASCII value. Next, it wraps that in a char  function and concatenates the results.

So the final query will be: 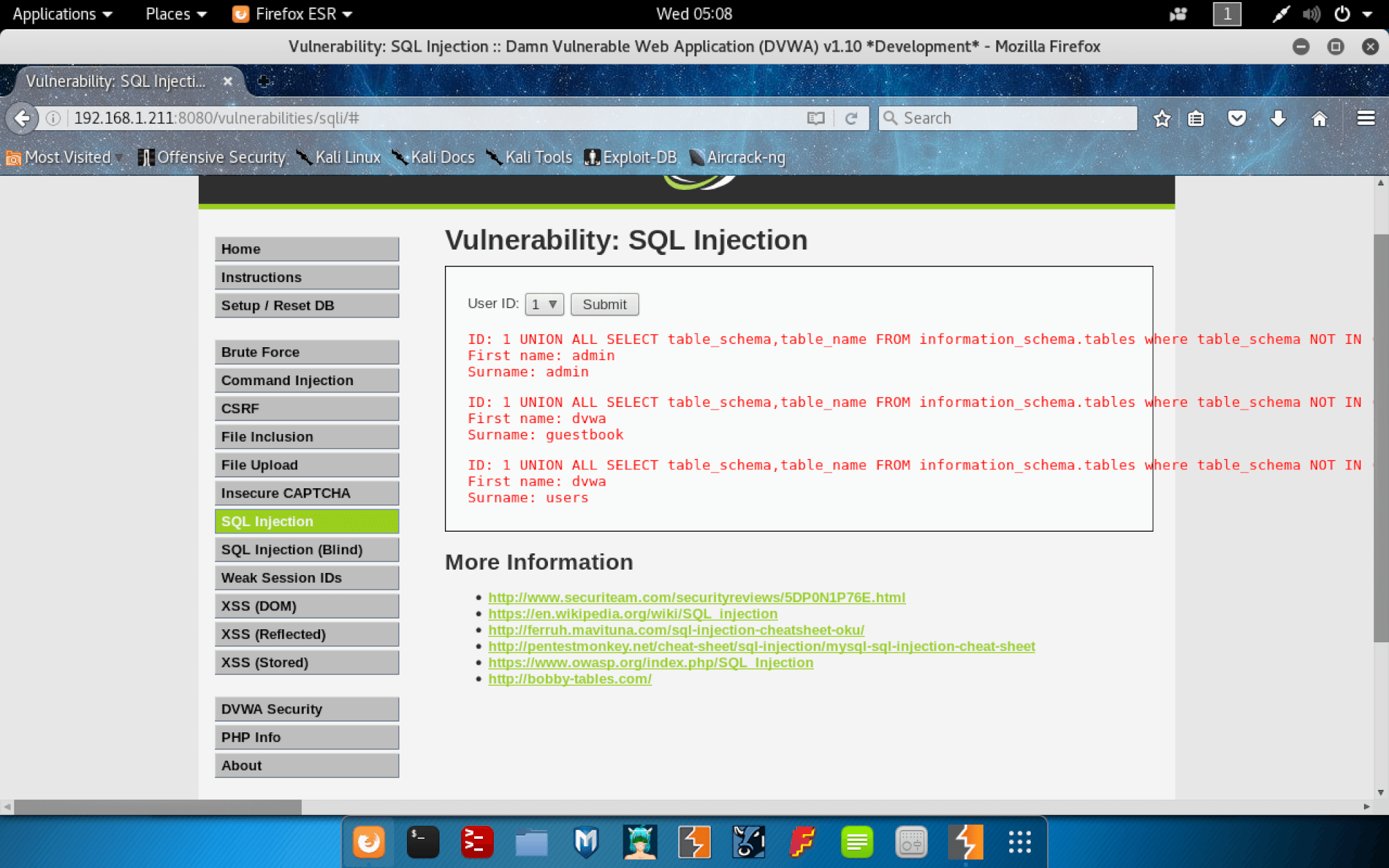 Admittedly, that’s a pretty awful looking query, but it’s going for results rather than style. This returns a list of all the different user tables, although there aren’t many in this example.

Now that this is working, I want to try something a bit more interesting. This time, I will try to list off any MySQL usernames and password hashes.

For that, I’m going to set the value attribute to:

Running this is interesting since it returns results that include the username and password hash for MySQL users. With this, you could now take the results offline to crack them using a password cracker. 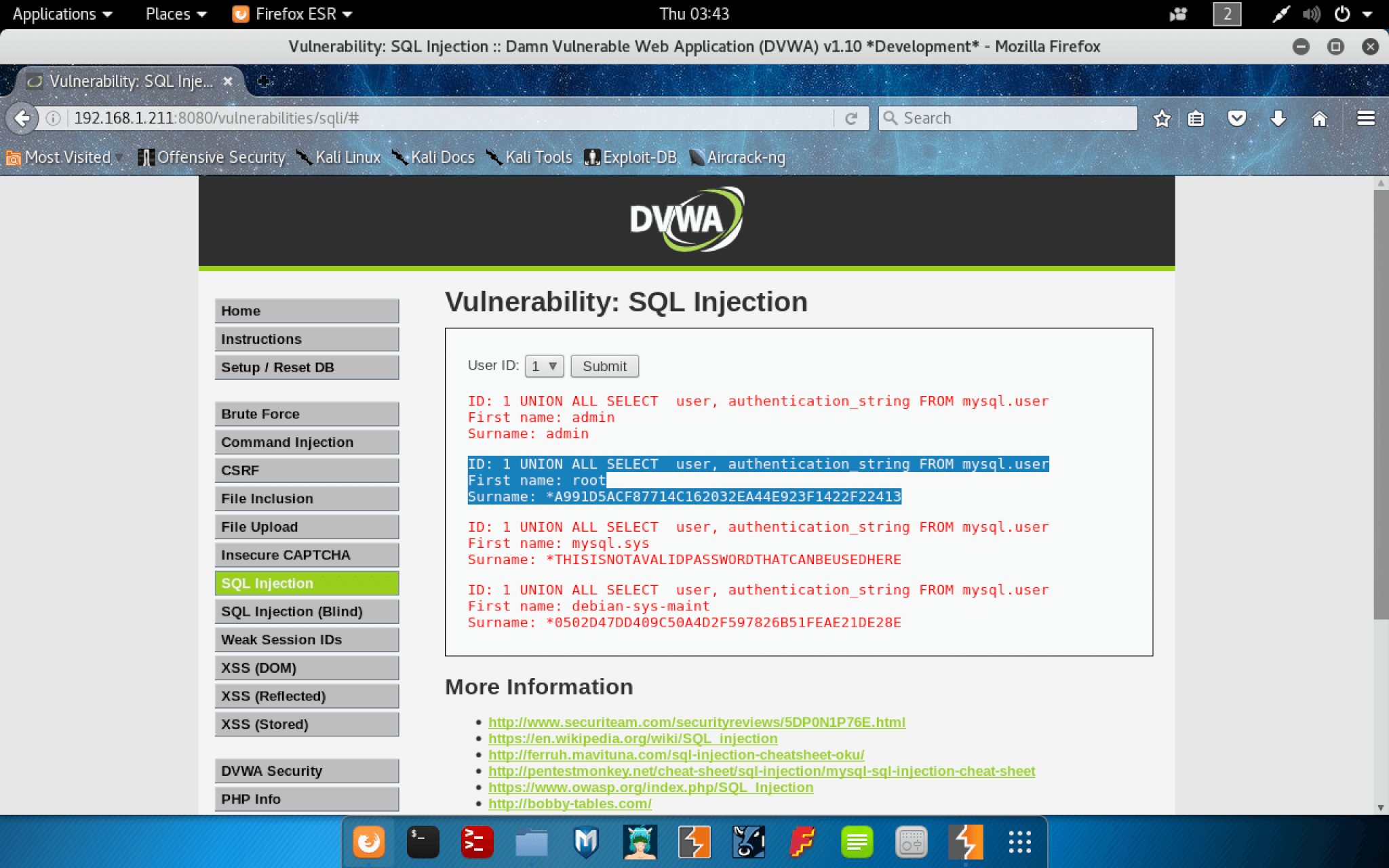 All good things must come to an end

While there’s a lot more to do here, I’ll leave you here and let you keep learning on your own.

Don’t forget, user interfaces are just suggestions and errors let you know that you’ve found something interesting. If you want to explore SQL further, you can read another of our blog posts on How To Migrate Your SQL Server Database to Amazon RDS.

Happy hacking, and thanks for reading!