Over the course of a few hours this past September 20, some of the Internet’s most popular sites like Netflix, Airbnb, and IMDb – along with other AWS customers – suffered major latency and even some outages. The proximate cause? Amazon’s Status dashboard told the story of this AWS outage: 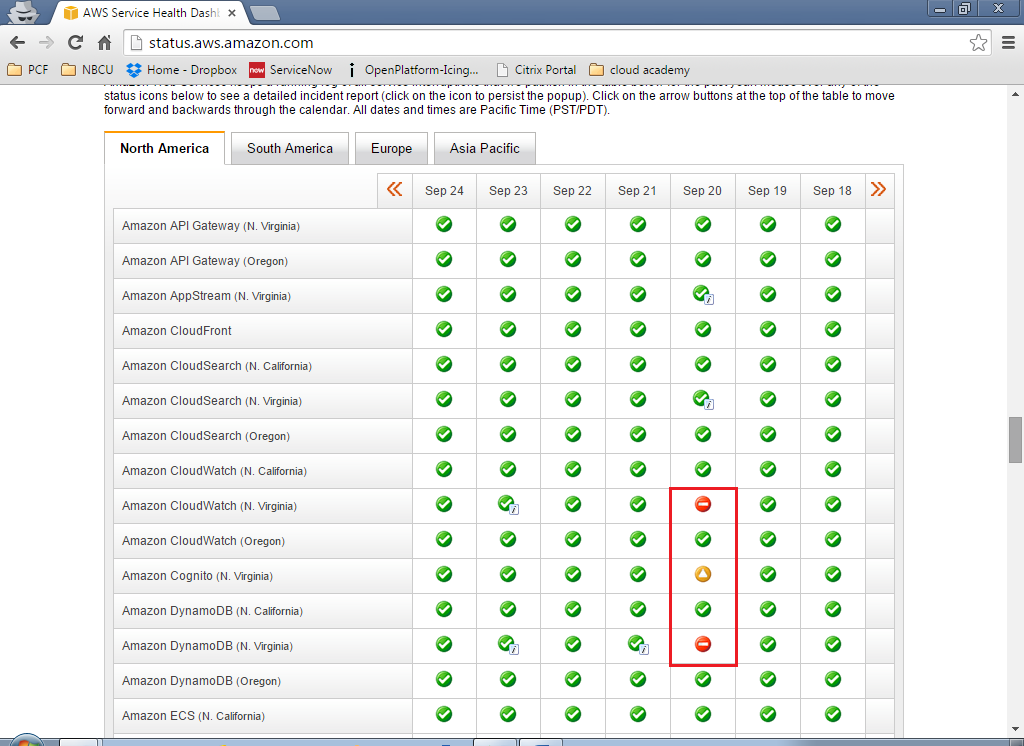 Between 2:13 AM and 8:15 AM PDT we experienced high error rates for API requests in the US-EAST-1 Region. The issue has been resolved and the service is operating normally.”

A six-hour AWS outage will almost certainly translate to catastrophic failure for someone. This is especially true considering that this outage had an impact on as many as 22 AWS services, including DynamoDB, CloudWatch, Auto-Scaling, Simple Email Service (SES), Simple Notification Service (SNS), Simple Queue Service (SQS), CloudFormation, Lambda, SWF, and WorkSpaces (all in the N. Virginia region).

What caused the AWS outage?

The outage and its cause were identified by early that morning when error rates in Amazon DynamoDB started increasing. In a short time, most of the other major services in US-standard region were dragged in.
The root cause was identified as a problem with Amazon’s DynamoDB metadata service for partitioning.

The impact cascaded through the AWS system, dragging down other services that use DynamoDB to store their internal tables. After six hours of firefighting, AWS engineers brought up the capacity of metadata service significantly, the metadata service is successfully reactivated, and storage servers are brought back up to full operation.

What was done in the aftermath of the AWS outage?

Amazon has taken many preventive actions to avoid any recurrence of similar events. The capacity of the metadata service has already been increased significantly, stricter monitoring is put in place to identify the membership size and arrive at the correct capacity. For the longer term, Amazon plans to segment the DynamoDB service so that instances of the metadata service each serve only portions of the storage server fleet.

Lessons learned from the AWS outage

Outages are bound to happen, whether your infrastructure is in an on-premise data center or the cloud. But to minimize your risk, your architecture should be built with a philosophy of “failure is bound to happen”.  Netflix, the media giant that relies heavily on AWS for its operation, quickly recovered from this crisis. They attribute their resilience to what they call chaos engineering.

With its experience from past AWS outages, Netflix regularly deploys its Simian Army: software that deliberately attempts to disrupt its systems. Chaos Monkey shutdowns their production system randomly. Chaos Gorilla simulates an availability-zone failure and Latency Monkey introduces latency on the network. By constantly testing itself with failures, Netflix barely blinked this time around, as it quickly redirected traffic from the impacted AWS region to datacenters in an unaffected area.

Netflix also maintains active-active replication for critical data. Though it cost them 25% more on their AWS bill, it serves them (and their customers) very well fends in just the kind of emergency we’re talking about.

Capacity planning and stricter monitoring of newer services is a must. In our case, an important element of the problem was the increased metadata generated by a new feature called the Global Secondary Index (GSI). GSI allows users to access the table using an alternate key. With GSI, the partition per table increased significantly for some very large tables. With a larger volume of data, the processing time inside the metadata service for some membership requests began to exceed the retrieval allowed time by storage servers. Due to the limited capacity of the metadata service, this quickly became an outage. According to Amazon

We did not have detailed enough monitoring for this dimension (membership size), and didn’t have enough capacity allocated to the metadata service to handle these much heavier requests.

Amazon quickly apologized to customers, while noting that DynamoDB has effectively enjoyed 100 percent uptime in the past three years.

“We apologize for the impact to affected customers. While we are proud of the last three years of availability on DynamoDB (it’s effectively been 100%), we know how critical this service is to customers, both because many use it for mission-critical operations and because AWS services also rely on it. For us, availability is the most important feature of DynamoDB, and we will do everything we can to learn from the event and to avoid a recurrence in the future.”

Amazon did its best given the problem it faced. They have also been careful to provide helpful and reassuring communication in the AWS outage. As a user of a massive service like AWS, their customers should also shoulder their share of the responsibility, to design and operate their infrastructures more like Netflix.

If you want to get a jump start on DynamoDB, check out Cloud Academy’s Working with Amazon DynamoDB Course.

Learn how to create Amazon DynamoDB tables, add indexes, and query your data in the Introduction to DynamoDB Hands-on Lab.