What is a disruptive technology and how does cloud computing help? 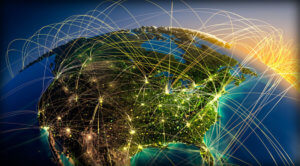 The buzzword at the recent AWS Summit in Sydney seemed to be “disruptive technology.” There was even a presentation from a company who described the foundation of their entire business model as a disruptive technology. The hosting infrastructure for all of this disruption was, of course, AWS.

What is a disruptive technology?

The term itself was coined by Clayton M. Christensen in his 1995 article Disruptive Technologies: Catching the Wave, so I guess we should start with his definition. After all, he’s the guy that coined it. Here’s how he described it:

Generally, disruptive innovations were technologically straightforward, consisting of off-the-shelf components put together in a product architecture that was often simpler than prior approaches. They offered less of what customers in established markets wanted and so could rarely be initially employed there. They offered a different package of attributes valued only in emerging markets remote from, and unimportant to, the mainstream.

So let’s try and map that onto AWS and see if we get a match.

Current Examples of  disruptive technologies in the cloud

Here are two companies whose business models are based on disruptive cloud technologies.

Uber is a US-based international company headquartered in San Francisco, California. It develops, markets and operates a mobile-app-based transportation network. Uber is not in the taxi business, at least in the conventional sense, since it owns no cabs and employs no cab drivers. Instead, it plays the role of matchmaker, matching a driver/car with a customer looking for a ride and taking a slice of the fare for providing the service. And what a disruption to the cab industry! I have yet to use the service, but it is definitely pretty high on my list of things to try.

Airbnb is a website for people to rent out lodging. It has over 800,000 listings in 33,000 cities and 192 countries. Users of the site must register and create a personal online profile before using the site. Every property is associated with a host whose profile includes recommendations by other users, reviews by previous guests, and as a response rating and private messaging system. Consider how Airbnb is disrupting the hotel industry.

What these companies and others like them have in common is that they don’t really have any assets to sell, but rather create and leverage networks (in the cloud).
Others that spring to mind, though they’ve been around a little longer, are eBay and Facebook.  In the case of eBay, most traditional retailers were slow to move into the online space because they didn’t consider themselves “technology companies.” Will the same fate befall the taxi and hotel industries if they, too, fail to react to what’s happening around them?

I personally hadn’t given much thought to disruptive technologies until I went to the AWS summit and heard all that buzz. I sat next to a guy and I asked him what he did and he said

My company is sort of a disruptive technology company. We deploy databases on AWS for companies who are sick of paying exorbitant prices to the likes of Oracle for licences.

Very interesting. I am still thinking about what I can technologically disrupt using AWS to make my fortune. No big ideas yet.

So, what are you waiting for? Get out there and start disrupting!