In our previous post on DynamoDB, An Inside Look Into NoSQL, we mentioned the various distributed techniques used while architecting NoSQL data stores. A table nicely summarized these techniques and their advantages. In this article, we will go into the details of partitioning and replication.

As mentioned earlier, the key design requirement for DynamoDB is to scale incrementally. In order to achieve this, there must be a mechanism in place that dynamically partitions the entire data over a set of storage nodes. DynamoDB employs consistent hashing for this purpose. As per the Wikipedia page, “Consistent hashing is a special kind of hashing such that when a hash table is resized and consistent hashing is used, only K/n keys need to be remapped on average, where K is the number of keys, and n is the number of slots. In contrast, in most traditional hash tables, a change in the number of array slots causes nearly all keys to be remapped.” 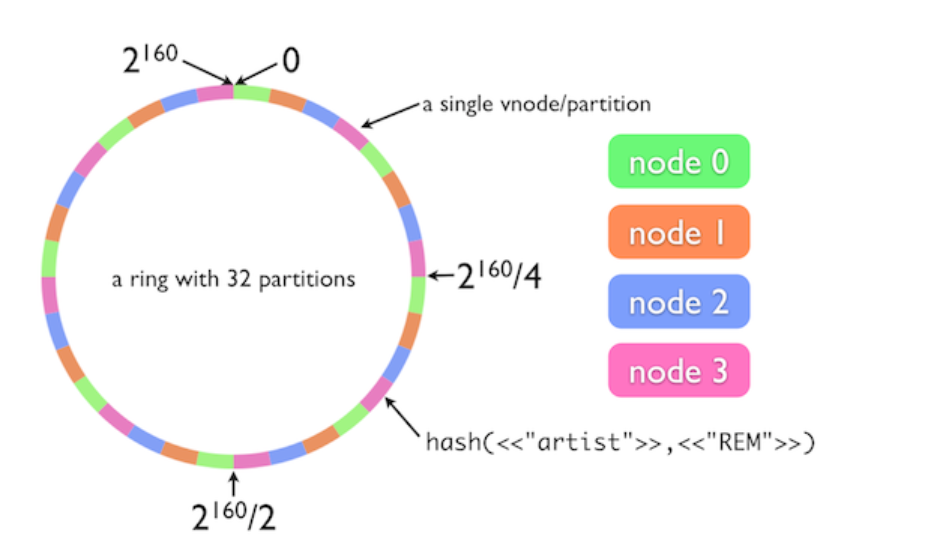 Let’s understand the intuition behind it: Consistent hashing is based on mapping each object to a point on the edge of a circle. The system maps each available storage node to many pseudo-randomly distributed points on the edge of the same circle. To find where an object O should be placed, the system finds the location of that object’s key (which is MD5 hashed) on the edge of the circle; then walks around the circle until falling into the first bucket it encounters.

The result is that each bucket contains all the resources located between its point and the previous bucket point. If a bucket becomes unavailable (for example because the computer it resides on is not reachable), then the angles it maps to will be removed. Requests for resources that would have mapped to each of those points now map to the next highest point. Since each bucket is associated with many pseudo-randomly distributed points, the resources that were held by that bucket will now map to many different buckets. The items that mapped to the lost bucket must be redistributed among the remaining ones, but values mapping to other buckets will still do so and do not need to be moved. A similar process occurs when a bucket is added. You can clearly see that with this approach, the additions and deletions of a storage node only affect its immediate neighbors and all the other nodes remain unaffected.

The basic implementation of consistent hashing has its limitations:

Every data item is replicated at N nodes (and NOT virtual nodes). Each key is assigned to a coordinator node, which is responsible for READ and WRITE operation of that particular key. The job of this coordinator node is to ensure that every data item that falls in its range is stored locally and replicated to N - 1 nodes. The list of nodes responsible for storing a certain key is called preference list. To account for node failures, the preference list usually contains more than N nodes. In the case of DynamoDB, the default replication factor is 3.

In the next article, we will look into Data Versioning.

Test your knowledge and learn how to use DynamoDB

We have some great DynamoDB content to test your knowledge on DynamoDB.