Data Engineering & Business Intelligence - An Exciting QuestAWS Machine Learning Labs and Certification PreparationNew Content: Platforms, Programming, and DevOps - Something for EveryoneMicro-Blog 3 of 3 - Read These Before You Take the CKA: The Cloud Is Just Someone Else's ComputerCloud Academy Ranks Highly Across G2 Spring 2021 Reports

People who hate programming are tempted to change their minds by the simplicity of Python. Most of the job listings have Python somewhere as part of the job description. Let us see what makes Python so special in this decade and future. Candidates and companies upskill or reskill in Python irrespective of their qualifications, roles, and experience. Needless to say, Python is very easy to learn.

Cloud Academy offers a Python for Beginners Learning Path that provides an ideal entry point for people wanting to learn how to program with the Python scripting language. The learning path includes courses, exams, hands-on labs, and lab challenges that give you the knowledge and real-world experience you need. 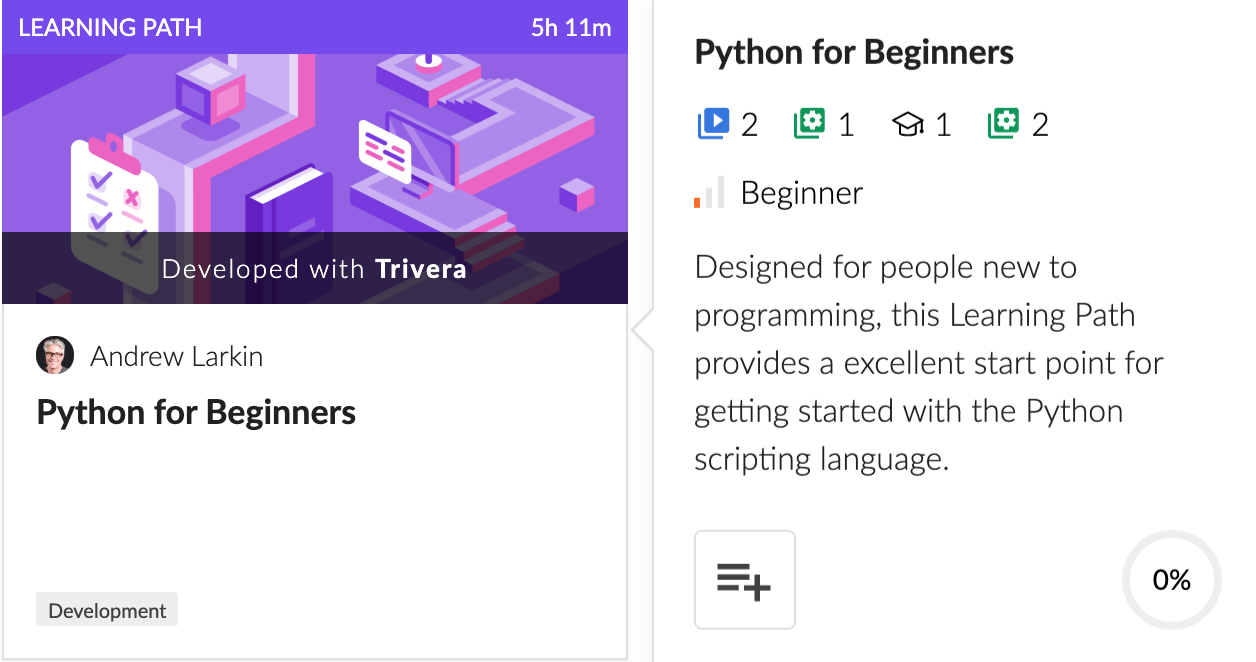 What is a programming language?

Let us spend a few minutes on understanding what is a programming language. If you have a programming background, this section is going to be a quick recap for you. Computers have built-in powerful components such as CPUs, memory, etc. CPUs can perform millions of instructions per second. How can we use computation and storage capability for our own benefit?

For example, I want to process payroll data for thousands of employees to display hundreds of products on an eCommerce website. Programming language helps us give instructions to computers to perform some activities. You might have heard about Java, Python, C, C++, PHP, COBOL, .NET, BASIC as they are examples of high-level programming languages.

We all know that computers can understand only electronic signals. There are only two possible things computers know: Presence of a signal(one) and the absence of a signal(zero). Computers use machine code (Contains zeros and ones) for processing purposes. Now how do we give instructions to computers when they don’t understand English, Spanish, or French.

This set of statements(code) is called a program. In the software field, this activity is known as coding or programming. With that background information, we will see one more basic concept.

The compiler converts your entire code into machine code and stores it as an executable format file. In the Windows operating system, the popular format is known as .exe format. Windows OS will use this executable file to launch the program whenever we double-click the executable file. Java, C, and C++ are compiler-based programming languages.

Python is an interpreted high-level language. Interpreter translates one line of code at a time into machine code then executes it before converting the next line of source code. Perl, PHP, and Ruby are some more examples of interpreter based languages. Python interpreters are available in major operating systems.

Let us see a small Python program. We can call it hello.py where it contains only one line.

This is the code requires to print “hello” in screen. In other languages, you need to write at least three or four lines to do the same work.

Python is globally well supported and adopted by the tech community

Some languages are designed to solve specific sets of problems. For example, Structured Query language (SQL) is meant for working with databases. LISP favored Artificial Intelligence related research and FORTRAN was developed for scientific and engineering applications. 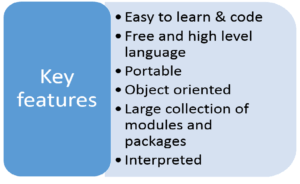 If you want to know whether Python has advanced features of a typical high-level language. Yes, it does. Python supports important language features: dynamic typing, late binding, garbage collection, exception handling and more than 200,000 packages with a wide range of functionality. Python is very stable and has been here for three decades.

Python is free and has strong support from the python global community. A non-profit organization, the Python Software Foundation, manages and directs resources for Python. Stackoverflow developer survey results say that Python is the most popular and wanted general-purpose language. 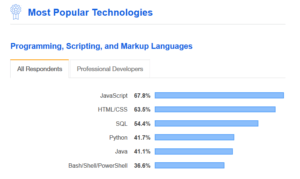 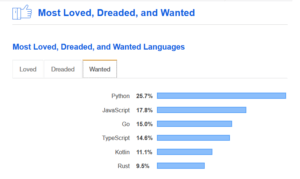 Why is Python so popular?

Now I am going to share more details on why Python is popular among job seekers.

Software related services provide employment to millions of people across the globe. Candidates are recruited for different roles in software development. Here below I have listed some of the roles from the software industry where Python skills are important.

Python developer/engineer: As a Python developer, you will get the opportunity to work in different jobs. You will be working on the design and development of front end and back end components. You can work on website development with exposure to Django framework or flask framework. Exposure to Databases such as MySQL, MongoDB is desirable with SQL knowledge.

Python automation tester: Software testers can use Selenium with Python and pytest for testing Automation.

System administrator: In operations, Python is used heavily as a scripting language. Python can be used to automate DevOps and routine day to day activities. In the AWS cloud environment, Boto is used as Amazon Python SDK. Boto is used to create, configure and manage AWS services such as EC2, Identity management, S3, SES, SQS, AWSKMS, etc. Open stack cloud is written in Python.

Researchers: Those who belong to the research community can use python module NumPy for scientific computing. More than that exploration of statistical learning can be performed using the scikit-learn library.

Cybersecurity analyst/security consultant: Python can be used to write penetration testing scripts, information gathering and automating purposes. For those of you who are familiar with Kali Linux, many scripts are written in Python.

Data science engineer: Python is a known data science packages. scikit-learn and matplotlib are some of the packages that are useful in data science. Python also supports various big data tools as well. Artificial intelligence is predicted as the future of technology. Python is the go-to language for career choice in data science.

Internet of things(IoT) developer: Python is emerging as a language choice of developers. 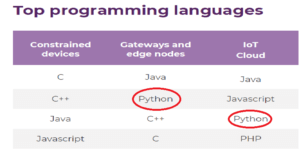 Python is also listed on the PopularitY of Programming Language (PYPL) index as a popular programming language.

If you get a chance to go through Python openings in any of the job sites, you will find more roles where Python knowledge is a must.

Python is used in many application domains. Here is a list of a few.

Python is widely used in scientific and numeric computing.

Python is a superb language for teaching programming, both at the introductory level and in more advanced courses. Schools and colleges are started to offer Python as a beginner level course for programming. So there are many openings in teaching as well.

The Tk GUI library is included with most binary distributions of Python.

Python is often used as a support language for software developers to build control and management, testing, and in many other ways.

Python is also used to build ERP and e-commerce systems:

As per TIOBE Index for December 2019, Python is placed in one of the top three languages to build new systems.

Before I conclude, I consider Python the best bet to learn to advance your career and future. What about you? I will meet you in another post to explain the steps involved in installing Python and writing simple code in Python.

Vijay is the founder of Margazhi System Networks LLP that provides consultancy in the network security R&D. He also teaches classes on various subjects especially on programming, Linux, cloud, and network security in the capacity of guest faculty during weekends. Prior to that, he gained a decade of experience in different roles in reputed IT service companies across the globe. He has earned the following certifications: SCJP, SCBCD, PMP, ITIL, Exin-Cloud, and CEH.

Want to train in a real cloud environment, but feel slowed down by spinning up your own deployments? When you consider security or pricing costs, it can be costly and challenging to get up to speed quickly for self-training. To solve this problem, Cloud Academy created a new suite of la...

How to Install and Use Python

Most of the time, people are interested in learning programming languages. They take baby steps in trying out the basics once the installation is done. Typically, installing any software is a cumbersome process, and the initial enthusiasm is usually drained away during these steps — esp...

Communicating dates and times with another person is pretty simple... right? “See you at 6 o’clock on Monday” sounds understandable. But was it a.m. or p.m.? And was your friend in the same time zone as you when you said that? When we need to use and store dates and times on Pytho...

Python is a powerful, general-purpose programming language used for a wide variety of applications. While it's easy to learn, mastering the Python programming language requires a deep understanding and the ability to write and develop code according to established best practices — refer...

Modern applications can be found everywhere today. Distributed microservices, cloud-native, managed resources, and serverless are parts of this complex whole. But how can we keep track of so many elements in our production environments? In these distributed environments, microservice...

The Python programming language has rapidly become the language of choice with developers building internet-based applications. In the Introduction to Python Learning Path, we’ll guide you through the basics of Python so you can acquire the skills and knowledge you need along with Hands...

How to Build an Intelligent Chatbot with Python and Dialogflow

Chatbots are a powerful example of artificial intelligence (AI) in use today. Just think about Google Assistant and how intelligent the platform became thanks to machine learning. But, what is a chatbot? How do you create a custom bot for your website? Which technologies can you use to ...

Amazon Machine Learning: Use Cases and a Real Example in Python

Installing Python version of the AWS CLI on Windows