Amazon Web Services EBS Volumes provides the block level storage volumes of Amazon EC2 instances. EBS volumes are highly available and reliable storage volumes that can be attached to the EC2 instances of the same Availability Zone over AWS internal network. Elastic Block Storage (EBS) is a storage service that is backed by network-connected block storage. So IOPS performance of an EBS volume is measured by the network throughput between the instance and EBS volume.

Standard Volumes offer cost-effective storage and can deliver approximately 100 IOPS on average, or burst of hundreds of IOPS. Standard Volumes size can range between 1 GB to 1 TB.

Provisioned IOPS (PIOPS) Volumes are designed for heavy I/O intensive workloads like databases and consistent high I/O throughput. You can specify an IOPS rate when you create the volume. PIOPS Volumes size can range between 10 GB and 1 TB.

The Standard or Provisioned IOPS Volumes I/O performance will depend on the Volume Size and Instance Type. 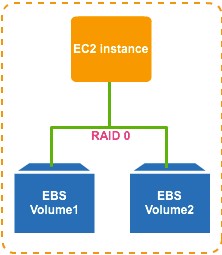 To get both a faster I/O performance and more than 1TB of volume sizes, you can create a RAID 0 striping using more than one EBS volume.

Advantage: When we perform the RAID 0 Striping of multiple volumes, IOPS are distributed among the volumes of a stripe. If you add another volume to RAID 0, you get the straight addition of IOPS throughput of that volume and additional volume size.

To take advantage of the RAID 0 striping, the instance type should support the High Networking Performance (like m3.xlarge, c3.2xlarge, r3.2xlarge, etc.).

Disadvantage: Loss of a single volume results in a complete data loss.

To avoid the data loss, we should take Snapshots of the RAID volumes frequently, and suspend the writes while taking the snapshot to ensure data integrity and reliability.

Here we will discuss on how to configure the RAID 0 Striping on 2 EBS volumes of several Linux machines. You can expand this to any number of volumes as per your requirements.

Hope this article will help you to manage the RAID configuration on EBS volumes to gain the maximum IOPS.