Caching is a technique to store frequently accessed information in a temporary memory location on a server. Read-intensive web applications are the best use-case candidates for a cache service.

In a web driven world, catering to users’ requests in real time is the goal of every website. Because performance and speed are required, a caching layer, like Amazon ElastiCache, is the first tool that every website employs in serving mostly static and frequently accessed data. So what benefits does a caching layer provide a user?

Caching is a technique to store frequently accessed information, html pages, images, and other static information in a temporary memory location on the server. Read-intensive web applications are the best use-case candidates for a cache service. There are a number of caching servers used across applications, the most notable are Memecached, Redis, and Varnish. I suggest you have a look at a previous post about Amazon storage options because it relates to this post.

There are various ways to implement caching using those technologies. However, with such large number of organizations moving their infrastructure to cloud, many cloud vendors are also providing caching as a service. Amazon ElastiCache is one such popular web caching service which provides users with Memcached or Redis-based caching that supports installation, configuration, HA, Caching failover and clustering.  Let’s talk a bit about Memcached and Redis before exploring the AWS versions.

Memcached is an open source, distributed, in-memory key-value store-caching system for small arbitrary data streams flowing from database calls, API calls, or page rendering. Memcached has long been the first choice of caching technology for users and developers around the world.

Redis is a newer technology and often considered as a superset of Memcached. That means Redis offers more and performs better than Memcached. Redis scores over Memcached in few areas that we will discuss briefly.

Amazon ElastiCache is a Caching-as-a-Service from Amazon Web Services. AWS simplifies setting up, managing, and scaling a distributed in-memory cache environment in the cloud. It provides a high-performance, scalable, and cost-effective caching solution. AWS removes the complexity associated with deploying and managing a distributed cache environment.
From the Amazon ElastiCache documentation, we learn that ElastiCache has features to enhance reliability for critical production deployments, including: 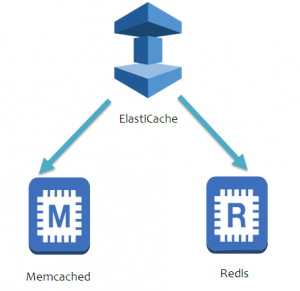 Before implementing Amazon ElastiCache, let’s get familiar with a few related terms:

Nodes are the smallest building block of Amazon ElastiCache service, which are typically network-attached RAMs (each having an independent DNS name and port).

Clusters are logical collections of nodes. If your ElastiCache cluster is of Memcached nodes, you can have nodes in multiple availability zones (AZs) to implement high-availability. In the case of a Redis cluster, the cluster is always a single node. You can have multiple replication groups across AZs.
A Memcached cluster has multiple nodes whose cached data is horizontally partitioned across each node. Each of the nodes in the cluster is capable of read and write.

A Redis cluster, on the other hand, has only one node, which is the master node. Redis clusters do not support data partitioning. Rather, there are up to five replication nodes in-replication groups which are read-only. They maintain copies from the master node which is the only writeable node. The data are copied asynchronously to the read-replicas, and read requests are spread across read-replica clusters. Having multiple read replicas in different AZs enables high availability.

Until now we have discussed both the caching engines, but I may seem biased towards Redis. So the question is, if Redis is all powerful, then why doesn’t ElastiCache provide only Redis? There are few good reasons for using Memcached: 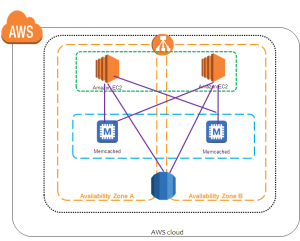 Each node in a Memcached cluster has its own endpoint. The cluster also has an endpoint called the configuration endpoint. If you enable Auto Discovery and connect to the configuration endpoint, your application will automatically know each node endpoint – even after adding or removing nodes from the cluster. The latest version of Memcached supported in ElastiCache is 1.4.24.
In a Memcached-based ElastiCache cluster, there can be a maximum of 20 nodes where data is horizontally partitioned. If you require more, you’ll have to request a limit increase via the ElastiCache Limit Increase Request form.

Apart from that, you can upgrade the Memcached engine. Keep in mind that the Memcached engine upgrade process is disruptive. The cached data is lost in any existing cluster when you upgrade.
Changing the number of nodes in a cluster is only possible for a Memcached-based ElastiCache cluster. However, this operation requires careful design of the hashing technique you will use to map the keys across the nodes. One of the best techniques is to use a consistent hashing algorithm for keys.

We have discussed Redis and the replication groups earlier. All things considered, Redis will normally be the better choice: 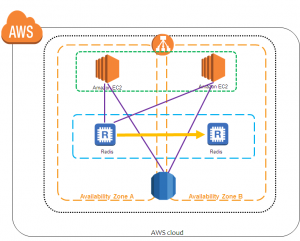 Currently, Amazon ElastiCache supports Redis 2.8.23 and lower. Redis-2.8.6 and higher is a significant step up because a Redis cluster on version 2.8.6 or higher will have Multi-AZ enabled. Upgrading is a non-disruptive process and the cache data is retained.
If you want to persist the cache data, Redis has something called Redis AOF (Append Only File). AOF file is useful in recovery scenarios. In case of a node restart or service crash, Redis will replay the updates from an AOF file, thereby recovering the data lost. But AOF is not useful in the event of a hardware crash and AOF operations are slow.

A better way is to have a replication group with one or more read replicas in different availability zones and enable Multi-AZ instead of using AOF. Because there is no need for AOF in this scenario, ElastiCache disables AOF on Multi-AZ replication groups.

Redis cluster supports backup and restore processes. It is useful when you want to create a new cluster from existing cluster data.

Amazon ElastiCache offloads the management, monitoring, and operation of caching clusters in the cloud. It has detailed monitoring via Amazon CloudWatch without any extra cost overhead and is a pay-as-you-go service. I encourage you to use ElasticCache for your cloud based web applications requiring split-second response times. I suggest you take a look at a post Michael Sheehy wrote in the spring on Amazon Storage Options because it offers a broad view of the topic in a very short article.  If you want to more background in a structured framework,  Cloud Academy has a course, Storage on AWS that is well regarded and they offer a 7-day free trial.

Cloud Academy also has a strong series of hands-on labs focused on Amazon Web Services, ElastiCache. These labs are a great way of putting what you just learned to practice immediately. Good luck and let us know what you think. We believe in continuous learning and your feedback is invaluable.