Amazon Web Services’ resource offerings are constantly changing, and staying on top of their evolution can be a challenge. Elastic Cloud Compute (EC2) instances are one of their core resource offerings, and they form the backbone of most cloud deployments. EC2 instances provide you with customizable and scalable server options. Let’s deconstruct the current AWS offerings as of April 2019 in order to best understand the EC2 offerings that are currently available.

EC2 Instances — And Their Prices — Are Constantly Improving

In general, EC2 instance types — their broad categories of specialization — have remained the same, but the specific models and sizes within each category evolve pretty quickly, so it’s important to remain informed. The main reason for this is because generational improvements within instance types result in both more powerful offerings and lower cost, so you need to be aware that what may be top-of-the-line one year can change quickly. Depending on your budget and workload, this understanding can inform your Reserve Instance purchasing, leaning you towards 1-year or Flexible RI offerings. 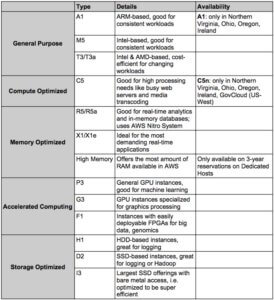 General Purpose instances are the most widely used and are a good first step if you’re new to AWS or cloud computing in general. They offer a great mix of cost and functionality, with their typical use being geared towards web servers, running development environments for your mobile or gaming apps, and running enterprise applications such as CRMs and ERPs. You’ll find that one of the main distinctions within this class is between instances with Fixed vs. Burstable performance. With Burstable performance EC2s, you’ll have the ability to quickly scale up your compute power — at a price.

A1 instances are general use but differentiate themselves by being an ARM-based offering, as opposed to Intel or AMD. As such, this platform will appeal more to the ARM development community and to applications that already run open source software such as Java and Python and the multiple architectures these tend to support.

M5 instances run on Intel Xeon processors and are thus suited to developing on the x86 architecture. They offer higher compute, memory, and network performance when compared to the A1.

M5 instances are great for development and test environments as well as web servers. They also offer support for Intel AVX-512, a set of CPU instructions that benefits the processing of encryption algorithms, so these instances are a great choice when security is important while not affecting performance.

These bursts of power don’t come for free — they’re handled by CPU credits. In general, when you are not running at maximum processing power, you earn CPU credits. The amount you earn depends on the time at a low threshold and the size of your instance. When you need to burst up, these credits are spent.

C5 instances are ideal for applications where you prioritize raw compute power, such as gaming servers, scientific modeling, high-performance web servers, and media transcoding. C5 instances run on Intel Xeon Platinum processors and are benchmarked at 25% faster than previous-generation C4 instances — a clear example of the benefits of generational improvement in cloud resources.

R5 and R5a are respectively the Intel and AMD offerings of “regular” memory optimized instances. These instances are ideal for memory intensive applications such as real-time big data analytics, large in-memory caches, and high-performance databases. The R5 and R5a instances benefit from the AWS Nitro System, which gives you access to almost all of the compute and memory resources of a server (i.e. allocating as little as possible to the OS). This optimization allows for lower cost when compared on a per-GiB basis to competitors.

High Memory instances have the greatest amount of available RAM, providing 6 TB, 9 TB, or 12 TB of memory in a single instance. Like X1/X1e, these are suited to production deployments of hugely memory intensive, real-time databases such as SAP HANA.

An important caveat with High Memory instances is that they are only available on Dedicated Hosts on a 3-year Reservation. This means that you will need to commit to a 3-year purchase, but you will get the security benefit of being on a host that is dedicated, i.e. you’ll have your own server to yourself and will not share resources as AWS does with other offerings.

I3 instances offer storage on SSD with a maximum of just under 16 GiB. However, these instances provide lower latency than HDD-based storage and also offer AWS Nitro System for optimized access to memory and computer resources (also called “Bare Metal” access).

Getting Real Experience With EC2

The breadth and complexity of AWS’ EC2 types can be overwhelming. It’s helpful to visit AWS’ own EC2 page to stay informed throughout the year new instances are added. If you haven’t had hands-on experience, there are resources to help you get started: Cloud Academy’s Labs are a safe, sandboxed environment where you can get real experience with EC2 instances without the risk of making changes (and sometimes costly changes) in a live environment. Once you get comfortable with EC2s, you’ll be able to quickly progress towards adding complementary resources and networking infrastructure to deploy your own environment.