(Update March 2019) For an up-to-date list of events Cloud Academy will be attending, please visit the Cloud Academy Events page.  Alternatively take a look at all the articles we’ve written on AWS yearly event, AWS re:Invent.

I had the pleasure of attending the AWS Summit in Sydney recently, so I think I’ll share with you a few of the more remarkable events of the day.

1. AWS is so big even the storm of the Century couldn’t keep people away

Leading up to the event, Sydney was hit with what many people called the “Storm of the century.” I figured this would keep attendance down at the AWS Summit and at least spare me having to fight through the usual mass of people. However, against all odds, people turned out in great numbers to participate. Anything to catch up on all the latest AWS Summit.

So, just how big is AWS?

The only reliable statistics that I could dig up are from James Hamilton in 2014, an Engineer at Amazon who gave a talk at AWS re:Invent 2014 on AWS Innovation at Scale. Below are some of the statistics he unleashed in regards to AWS during this talk.

Maybe I’ve fallen just a bit out of sync, but I strongly suspect that this “buzzword” has actually been around for a few years now. However, as I wrote elsewhere, it was definitely picking up steam at the AWS Summit. I am not too sure how I feel about the use of the phrase, as it can be argued that all this new technology is more “continuous innovation” than “disruption.” I suppose “disruptive” has become the new ‘new’.

3. AWS Lambda and Amazon Cognito can do really cool stuff together

AWS Lambda is a new compute service that runs your code in response to events and automatically manages the compute resources for you.

Amazon Cognito is a service that makes it easy to save mobile user data – such as app preferences or game state – in the AWS Cloud without the need for any custom backend code or infrastructure management.
I attended a session about AWS Lambda and Amazon Cognito where it was claimed:

Together with AWS Cognito, AWS SNS Push Notifications and AWS DynamoDB, AWS Lambda is a powerful tool in your arsenal for developing IoT/mobile apps, and beyond.

The speaker had a few pieces of hardware set up which included Bluetooth LE (Low Energy) Beacons  and Multiple Raspberry PIs creating a ‘geo fence’ (Each RPI sending telemetry data to a Kinesis stream in real-time).
He then had a Lambda function bound to Kinesis stream  which processed records in real-time and made the data available to mobile app to trilateration the position of the ‘target’ relative to the detectors  as per below: 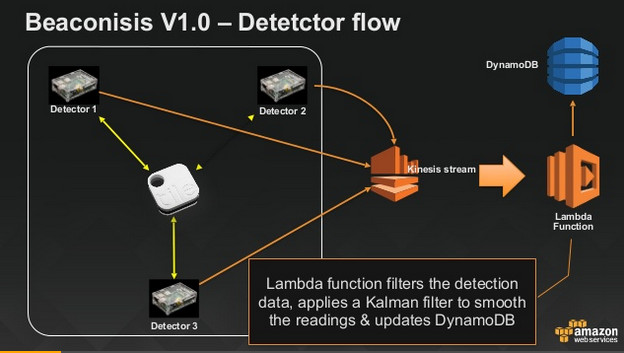 And Cognito was used for Identity management: 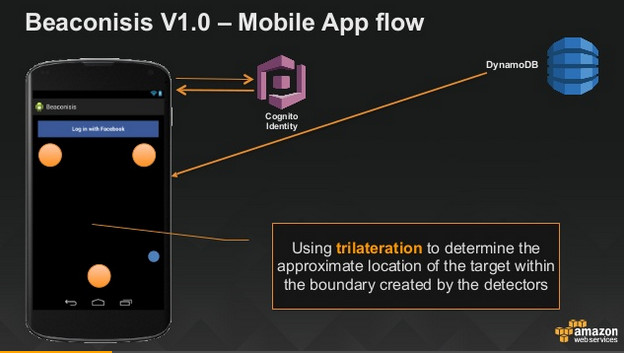 Without going into too much further detail, this will hopefully give you some idea of how AWS Cognito and AWS Lambda can work together to create some awesome applications…limited only by your imagination.

4. Amazon Machine Learning gets us closer to real Artificial Intelligence

Can Amazon Machine Learning deliver real Artificial Intelligence? I didn’t see Alan Turing at the AWS Summit, but theoretical results suggest that in order to learn the kind of complicated functions that can represent high-level abstractions (like vision, language, and other human tasks), you would need deep architectures. Does AWS have deep architectures? You bet. While watching a demonstration on Amazon Machine Learning I couldn’t help but think that this, combined with the deep infrastructures possible on AWS, brings us one step closer to real Artificial Intelligence. Mere speculation on my part, but interesting nevertheless. Read this Cloud Academy article on Amazon Machine Learning here.

5. Even after the AWS Summit, security still makes my head spin

I attended another session entitled “Using Security To Build With Confidence in AWS” with great anticipation. Security is one of the things that keeps me awake a night, and this session was all about the fact you don’t need to be a security expert to protect your organization data in the cloud, or to protect your workloads on AWS. You just need to be informed of the many security tools available in AWS and learn how to use them.
They started by talking about the shared responsibility model and then the AWS VPC Checklist Review:

They then branched out to discuss the various factors on which these items are built, and some points about responding to intrusions and recovering from them. It was a good informative discussion but I am not sure I learned anything I didn’t already know. And I’m still not completely comfortable that I’m truly on top of security. So is the statement: “you don’t need to be a security expert to protect your organization data in the cloud” quite true? I’m not convinced.

If you’d like to see the schedule and session slide decks from the Sydney’s AWS Summit, help yourself.