The Internet of Things (IoT) embeds technology into any physical thing to enable never before seen levels of connectivity. IoT is revolutionizing industries and creating many new market opportunities, with management consulting firm McKinsey predicting the IoT market reaching up to $581 billion of ICT spend alone in 2020. Cloud services play an important role in enabling deployment of IoT solutions that minimize time to market while integrating with other technologies (including artificial intelligence), and that’s where AWS fits in.

AWS re:Invent 2018 painted a clear picture on Tuesday with a flood of IoT announcements: AWS is committed to providing the best environment to support your IoT deployments. The announcements include several new services and important updates to existing services tools in the AWS IoT ecosystem. This blog digests everything and frames it in the context of AWS’ IoT offering.

AWS has been competing in the IoT market since 2015 when it announced its IoT core service. Quoting AWS:

“AWS IoT Core is a platform that enables you to connect devices to AWS Services and other devices, secure data and interactions, process and act upon device data, and enable applications to interact with devices even when they are offline”

IoT Core is where it all began and many subsequently released IoT services are integrated with IoT Core. Try out AWS IoT Core for yourself in our Hands-on Lab that teaches you how to use IoT core to manage two virtual smart devices: 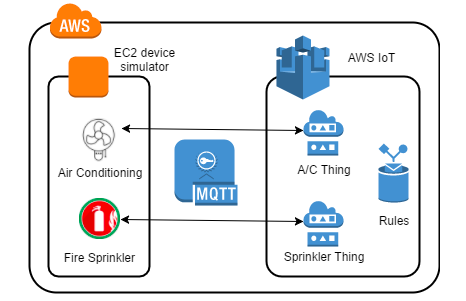 The following table describes all of the AWS IoT services along with when they were released, including the recently announced services that will be described in more detail later:

There have been three new IoT services announced at re:Invent so far. Each one promises to simplify the way of doing things to further improve customers’ ability to quickly deploy enterprise-grade IoT solutions.

AWS IoT Events makes it easy to detect and respond to system-wide events without the need to build custom applications. The events are interpreted from patterns in the streams of sensor data coming from your fleet of devices. These events could indicate anything from equipment slowdowns to mechanical failures in an industrial setting. IoT events automatically triggers alerts and actions based on logic you define.

AWS IoT SiteWise removes the challenges associated with gathering and monitoring Industrial IoT (IIoT) data. Conventionally, industrial sensor data is locked into proprietary systems on-premises and requires expert knowledge to retrieve and format in a searchable format. IoT SiteWise is software that runs on a gateway in your facility and automatically collects, organizes, and sends it to the AWS Cloud where it can be stored and analyzed. The gateway interfaces with servers storing IIoT data that could be coming from assembly lines or manufacturing robots, for example. The gateway can be an AWS Snowball Edge gateway or one of several popular third-party industrial gateways that are likely to be found in your facility. IoT SiteWise lets you focus on optimizing your operations rather than worrying about data collection and managing applications.

In addition to the new IoT services, there were several re:Invent announcements improving existing IoT and IoT-related services.

To start, there were a cluster of AWS IoT Greengrass announcements. Greengrass extends AWS cloud services onto devices to run locally on devices that have sufficient compute power. The announcements included:

Speaking of Amazon FreeRTOS, there was also some more love for it. You can now connect devices running Amazon FreeRTOS to AWS through local network Android and iOS devices over Bluetooth Low Energy (BLE).

Amazon Timestream is a new service that can be used with IoT data. As the name suggests, Timestream is a managed database service that is purpose-built for time-series data, just like the streams of data that IoT sensors report. By considering how fast time-series data arrives, AWS has created a database that is 1,000X faster than relational databases and is only 1/10th the cost.

re:Invent 2018 has been good to the IoT community. The new services all tend to focus on making it easier to achieve different IoT objectives. You may have struggled with achieving some of the objectives yourself or maybe you are pre-production and not sure what platform is going to be the best for your needs. One thing is for sure, AWS has shown their commitment to supporting IoT workloads for the year ahead and have earned your consideration for deploying your IoT solutions. If you’re interested in getting started, check out our introductory IoT and AWS IoT courses.

Are you at Amazon re:Invent this week? Visit Booth #1809 to chat with our team and see how we can transform your cloud training.