Modern Linux and DevOps have much in common from a philosophy perspective. Both are focused on functionality, scalability, as well as on the constant possibility of growth and improvement. While Windows may still be the most widely used operating system, and by extension the most common for DevOp practitioners, it is not the preferred OS by many. That honor goes to Linux. There are many DevOp practitioners who would like to try Linux for a variety of reasons but do not know exactly which distribution to use. This is a common problem and one that stems from a poor understanding of what each distribution offers.

No single distribution can be considered the best. One of the core principles behind Linux is customization. Different distributions, or versions, of Linux, can be created depending on the exact needs of a particular individual or group much the same way different cryptocurrencies are based on the same blockchain technology but with minor changes to fulfill specific functions; take Ethereum classic vs Ethereum for example.

In this article, we will discuss which Linux distributions are most suitable for DevOps practitioners. Although most readers of this article will be at least partially familiar with Linux some may not be. For this reason, we will begin with a brief overview of what is Linux, why it can be useful for those working in DevOps, and finally, the major Linux distributions used in the field of DevOps.

Whether you’re new to DevOps and Linux or a seasoned vet, Cloud Academy’s courses and learning paths are a great way to keep up with the latest technology. In DevOps Fundamentals, you will be taken through the practical aspects of DevOps in a non-vendor-specific way and help you to determine how best to apply these practices for your company. In Linux Server Professional, while the main focus will be on Linux, where there’s a parallel or overlap with the professional administration of deployments on Amazon’s AWS architecture, we will also highlight the skills you’ll need to integrate the cloud into your Linux portfolio. 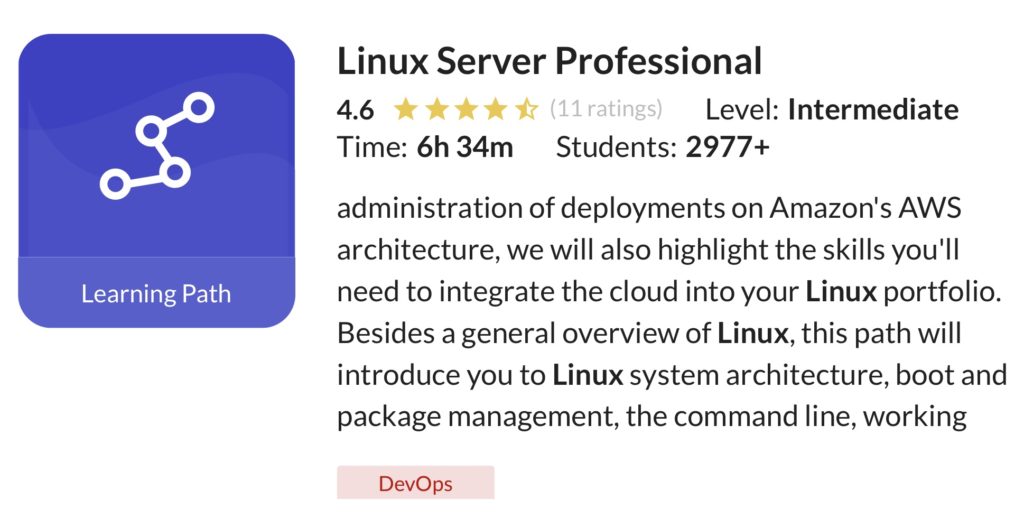 A computer’s operating system is in charge of a computer’s resources and hardware operations like storage, CPU, and memory. It acts as a middle man between software applications and hardware and facilitates all functions and processes that occur in this domain. Linux is an open-source Operating System released under the GNU general public license. This allows anyone to modify, view, and even redistribute Linux systems if they so desire. “Linux was developed by a Finnish programming student who developed his operating system based on the old UNIX operating system. Because of its modular nature and open source philosophy coding professionals and hobbyists around the world have been developing Linux, and various Linux distributions, for many years” writes Amanda Jane, a marketer writer at 1day2write.com and Writemyx.com.

There are many advantages to Linux in general which many individuals are not familiar with. For starters, Linux users rarely get viruses or malware. This is because most virus or malware developers do not spend time writing such programs for the Linux platform since so few people use it. There is also the added advantage that Linux cannot natively run windows programs so any viruses or malware written for Windows will not run on Linux.

As an operating system, Linux is also very lightweight and its use often results in a much higher level of performance than that experienced with Windows. There are also little to no copyright restrictions so users can easily distribute, or even sell, software with ease. Third party software is almost always significantly cheaper than it is with Windows.

As previously mentioned, Linux and DevOps share very similar philosophies and perspectives; both are focused on customization and scalability. The customization aspect of Linux is of particular importance for DevOps. It allows for design and security applications specific to a particular development environment or development goals to be created. There is much more freedom over how the operating system functions compared to Windows. Another item of convenience is that most Software delivery pipelines use Linux based servers. If the DevOps team is using a Linux based operating system they can do all testing in house and with extreme ease.

Because the Linux Kernel can process huge amounts of memory any Linux based system is highly scalable. If the hard drive or other hardware requirements change during the development process these requirements can be added without losing processing power. The same cannot always be said of Windows.

Ubuntu is often, and for good reason, considered at the top of the list when this topic is discussed. Although no official statistics are available for Linux use and implementation it can be said with some degree of certainty that Ubuntu is the most widely used Linux distribution in the world. Because of this, there is a wide array of free, open-sourced, software tools available to Linux based DevOps practitioners. Those that are not free will be only a fraction of the price of similar software available on the Windows platform.

Because of Ubuntu’s large distribution, it has very strong community support and also offers the option of commercial support should one desire it.

The CentOs is a notable mention simply because of the way it works with Red Hat Enterprise Linux (RHEL). RHEL is a popular Linux distribution that is widely used for applications such as microservers, cloud computing, application development, storage solutions, and many more. If a developer or development firm needs to support a great deal of RHEL application CentOS offers an open-source, community-based, alternative to the licensed RHEL product. “The overwhelming popularity of RHEL has caused CentOs to become a very valuable tool for developers making it one of the most important Linux distributions for DevOps practitioners.” writes Josh Hart, a web developer at Britstudent.com and Nextcoursework.com.

Fedora is another option for RHEL centered developers. It differs from CentOS in two very important ways. For starters, Fedora is not an RHEL clone like CentOS. It is officially adopted by the RHEL team since Red Hat uses Fedora as a sort of proving or testing grounds for upcoming RHEL technologies. Because of this Fedora is fully integrated with RHEL.

Build off the Linux distribution CloudLinux is an operating system designed specifically for cloud computing and shared hosting providers. For those who do not know Shared hosting refers to a type of web hosting where a single server is shared by several websites. Cloud Linux currently powers somewhere in the range of 20 million web pages. Because it is based on CentOs, which in turn was heavily based on RHEL, one can feel confident in its scalability and customization capabilities.

Debian is a Linux distribution for servers. Debian is different from Ubuntu in what it prioritizes. For Debian stability is more important than innovation and because of this, it lags behind Ubuntu when it comes to the integration of new software packages and libraries. With this in mind, it offers an enterprise solution for those who want to focus on overall stability first and foremost.

There are many good reasons why DevOps practitioners should implement Linux distributions in their workplace. The benefits far outweigh the negatives and it can ultimately lead to a smoother, more efficient development environment. This being said, choosing the right distribution is not always easy. One must properly identify what exact requirements need to be fulfilled before making the decision.

As development requirements become more demanding, especially with the rise in cloud computing software, many more developers will begin turning to Linux not only for its customization and scalability but also because of its efficiency and superior processing capabilities compared to Windows and Apple.