Let’s start our discussion by setting a foundation of what microservices are. Microservices are a way of breaking large software projects into loosely coupled modules, which communicate with each other through simple Application Programming Interfaces (APIs).

Microservices have become increasingly popular over the past few years. They are an example of the modular architectural style, based on the philosophy of breaking large software projects into smaller, independent, and loosely coupled parts, which has gained prominence among developers for its dynamic and agile qualities in API management and execution of highly defined and discrete tasks.

The history of microservices

Let’s start with a simple example: Suppose I need to build a classic web application using Java. The first thing I will do is design a Presentation Layer (the user interface), followed by an Application Layer, which handles all of the business logic. This is followed by an Integration Layer to enable loose coupling between various components of the Application Layer. Finally, I will design a Database Layer that will be accessible to the underlying persistence system.

To run the entire application, I will create either a EAR or WAR package and deploy it on an application server (like JBoss, Tomcat, or WebLogic). Because I have packaged everything as an EAR/WAR, my application becomes monolithic in nature, which means that even though we have separate and distinguishable components, all are packaged together.

Here’s an illustration of an example monolithic architecture: 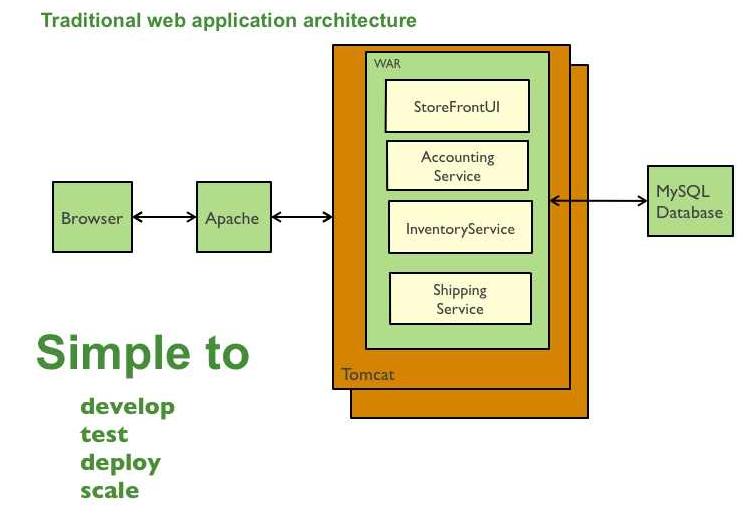 You may already be familiar with the characteristics of monolithic applications depending on your development experience. However, this example also stands to illustrate some of the challenges developers and architects face with this kind of design.

Here are the flaws:

With these thoughts in mind, let’s explore the value of microservices and how they can be used to provide the flexibility that’s lacking in monolithic architectures.

The theory behind microservices

One of the major driving forces behind any kind of architectural solution is scalability. Many of our peers in the software architecture and development world have gravitated towards a book called The Art of Scalability. The book’s defining model was the Scale Cube, which describes three dimensions of scaling: 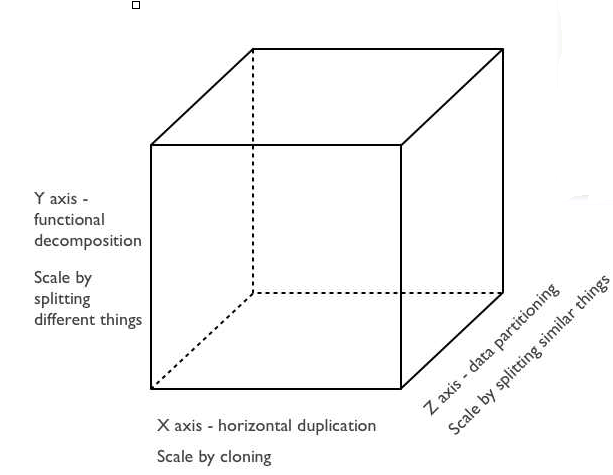 As you can see, the X-axis represents horizontal application scaling (which we have seen is possible even with monolithic architecture), and the Z-axis represents scaling the application by splitting similar things. The Z-axis idea can be better understood by using the sharding concept, where data is partitioned and the application redirects requests to corresponding shards based on user input (as is commonly done with databases).

The Y-axis represents functional decomposition. In this approach, various functions can be seen as independent services. Instead of deploying the entire application once all the components are available, developers can deploy their respective services independently. This not only improves developer time management but also offers greater flexibility to change and redeploy their modules without worrying about the rest of the application’s components. You can see how this is different from the earlier diagram which showed a monolithic design: 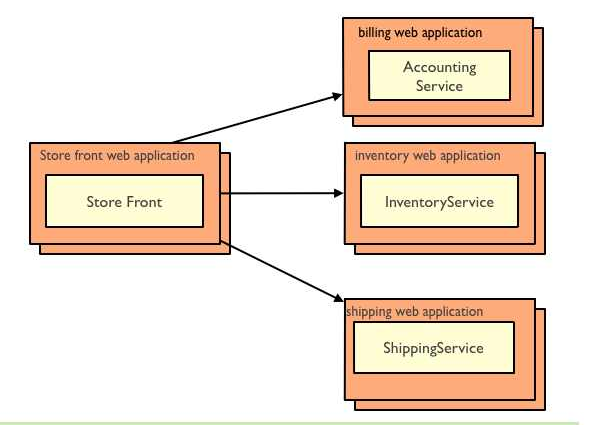 The advantages of microservices seem strong enough to have convinced some big enterprise players such as Amazon, Netflix, and eBay to adopt the methodology. Compared to more monolithic design structures, microservices offer:

Microservices may be a hot trend, but the architecture does have drawbacks. In general, the main negative of microservices is the complexity that any distributed system has.

Here’s a list of some potential pain areas and other cons associated with microservices designs:

Of course, with the right kind of automation and tools and the properly trained staff, all the above drawbacks can be addressed.

Now that we understand microservices, how are they deployed?

The best way to deploy microservices-based applications is within containers, which are complete virtual operating system environments that provide processes with isolation and dedicated access to underlying hardware resources. One of the biggest names in container solutions right now is Docker, which you can learn more about in our Getting Started Course.

Code deployments can also be completed using an Open Service Gateway Initiative (OSGI) bundle. In this use case, all application services will be running under one Java virtual machine, but this method comes with a management and isolation tradeoff.

How to move forward with microservices

As application development trends continue to evolve, the debate between using microservices or leveraging traditional monolithic architectures will only become more pronounced. In the end, developers must do their due diligence and understand what works for their specific use cases.

For smaller companies, starting with a monolithic application can be simpler, faster, and cheaper — and if the product hasn’t gotten too mature, it can still be migrated to microservices at an appropriate time. The huge companies with millions of users are obvious examples of the best use case for microservices, as they need to ensure the uptime, scalability that the added modularity can provide.

A quick video review of the advantage of microservices

Check out our video below where Cloud Academy DevOps lead Jeremy Cook compares monolithic vs microservice architectures. And you can get further info straight from the source: our course on .Net Microservices – Refactors and Design.

Resources to get started with microservices

If you’re looking to use microservices, get started today with these resources on Cloud Academy: