With the release of the open source Netflix Spinnaker delivery platform, the cloud-savvy video on demand company signals that the cloud is bigger than AWS

Video on demand provider Netflix has been successfully running much of their operation in the AWS cloud for six years now, and the relationship has been mutually beneficial. If people are talking about AWS, then the odds are that you’ll hear something about Netflix: whether it’s how they migrated their huge workload to AWS, their Simian Army resilience testing tool, or how well Netflix manages AWS outages. Now you can add Netflix Spinnaker to the conversation.

In a blog post a few months ago, Netflix first mentioned Spinnaker, an open source, multi-cloud deployment tool that was then under development. The post mentioned how the company was planning to move to Spinnaker from its own Asgard. The Netflix Spinnaker code is now publicly available.

What is Netflix Spinnaker?

Netflix Spinnaker is an open source multi-cloud Continuous Delivery platform for releasing software changes with high velocity and confidence. Spinnaker is designed with pluggability in mind; the platform aims to make it easy to extend and enhance cloud deployment models. To create a truly extensible multi-cloud platform, the Spinnaker team partnered with Google, Microsoft and Pivotal to deliver out-of-the-box cluster management and deployment. As of today, Spinnaker can deploy to and manage clusters simultaneously across both AWS and Google Cloud Platform with full feature compatibility across both cloud providers. Spinnaker also features deploys to Cloud Foundry; support for its newest addition, Microsoft Azure, is actively underway.

It’s very interesting that Netflix, which has always relied on AWS for its infrastructure, has now built a tool to migrate or deploy on AWS or Google Cloud Platform and Pivotal. Are they trying to reduce their dependency on a sole vendor?

Netflix Spinnaker deployment management provides for continuous integration and workflow. It facilitates the creation of pipelines that represent a delivery process that can begin with the creation of some deployable asset (such as a machine image, JAR file, or Docker image) and end with a deployment. 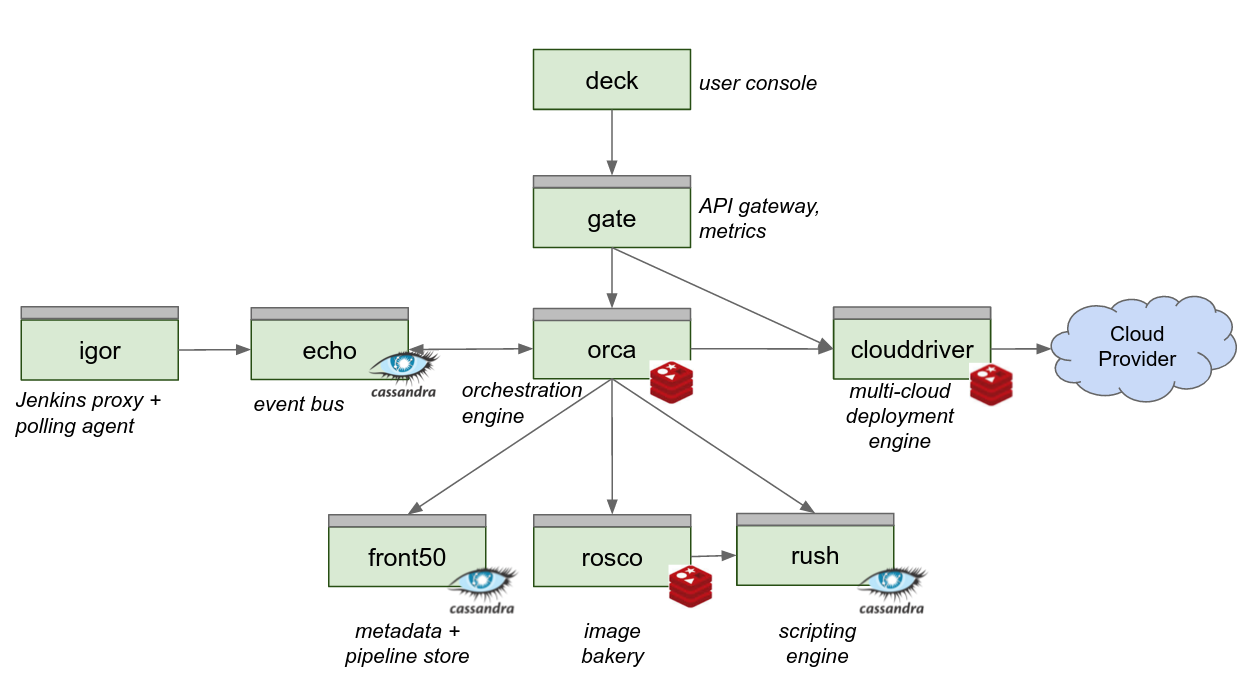 Setting up Spinnaker for development takes just a few steps. These instructions cover pulling Spinnaker from source and setting it up to run locally against Amazon Web Services and/or Google Cloud Platform accounts. We will then see how Spinnaker is configured for the AWS Cloud from a developer machine.
Before jumping in, make sure you have an AWS account. We’ll follow the steps from the Spinnaker getting started guide:

This has been just a quick introduction to Netflix Spinnaker. With support for many cloud vendors and even containers like Docker, this looks like a very promising package. We hope to bring you more posts on Spinnaker in coming weeks to demonstrate how it can be installed on AWS and Google Cloud Platform, and how it can manage clusters and workflows.