I cut my teeth building infrastructure, so if I hadn’t already seen the writing on the wall for infrastructure engineers, then this comment from Jeff Barr would have had me a little alarmed.

I like to think of infrastructure as the part of a system that everyone needs and no one likes to work on! It is often undifferentiated & messy, tedious to work on, difficult to manage, critical to the success of whatever relies on it, and generally taken for granted (as long as it works as expected).

Sounds like my idea of fun actually, but I digress. What Jeff is talking about is the launch of a new, fully-managed service from AWS that allows customers to create, publish and manage application programming interfaces (APIs) without having to deploy any infrastructure.

The API Gateway makes it easy for you to connect all types of applications to API implementations that run on AWS Lambda, Amazon Elastic Compute Cloud (EC2), or even a publicly addressable service hosted outside of AWS. The following diagram (from the Amazon API Gateway Product Details page) shows how a typical API gateway call works: 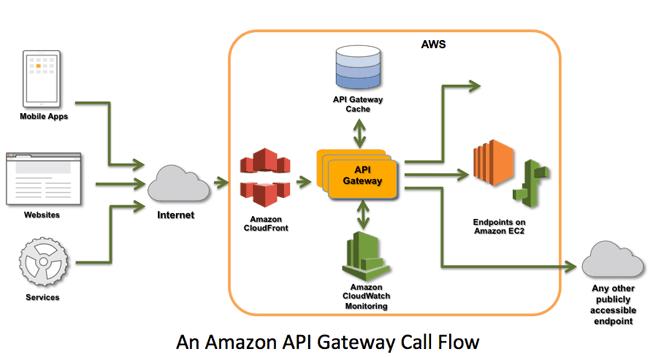 Amazon API Gateway: how it works

To try and understand what this actually means a little better, let’s try and picture a typical scenario. Here’s a list of the details an AWS customer – looking to host backend web services for mobile or web applications – would have needed to consider before the Amazon API Gateway rollout:

As I am sure you can appreciate, a whole lot of work, time, and money would be needed to get – and keep – all this running. Now all you need in order to connect to all types of applications for API implementations is to fire up the Amazon API Gateway and start writing your code.

I’m not a developer, just a humble system administrator, and there is obviously a lot more to this than that. But this will hopefully communicate the general point of how powerful this new AWS service is. So if you’ve had the germ of an idea for the next big app to take the world by storm floating around in your mind for a while, well, it just has gotten a whole lot easier for you to make that happen.