“Migration” was a word that came up over and over again at last week’s AWS re:invent 2015, where Amazon announced a series of new features and services to make cloud migrations easier and more cost-effective.

One of the better-known companies currently using AWS is AOL. Durga Nemani, AOL Systems Architect, devoted his presentation to explain how AOL was able to reduce the time and cost of processing massive amounts of clickstream data by leveraging AWS big data technologies. AOL moved to AWS in 2014, migrating from a large (and expensive) in-house Hadoop cluster to an Amazon EMR (Elastic Map reduce) and Amazon S3 deployment for storing raw and processed data.

The main problem AOL’s data scientists had faced running a single in-house cluster, was the lack of scalability and flexibility. As their workload and dataset structures regularly changed, a single huge cluster was impossible to optimize. The “one size fits all” model simply did not work in this case.

AOL now uses a hybrid approach: they process and store data using AWS services and then load their processed data into an in-house AOL database that is accessed by the AOL Reporting tool. 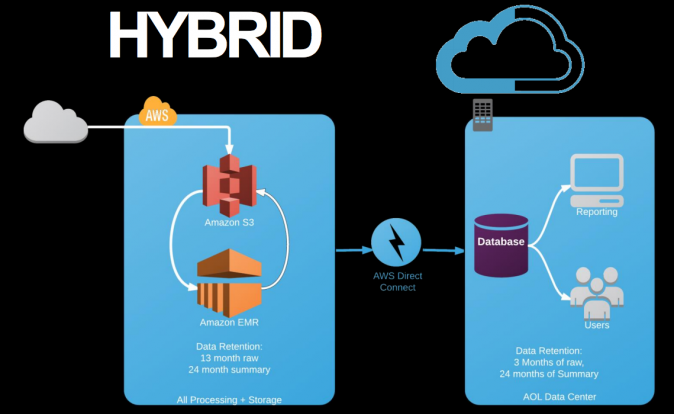 AOL uses Amazon S3 for storing raw and processed data, and Amazon EMR (Elastic Map Reduce) for running analytics tasks on top of a Hadoop cluster. Thanks to Amazon Web Services, AOL was able to abandon the single big cluster model in favor of several dozen EMR clusters of multiple sizes – each used when workload conditions justified it.

The ability to create EMR clusters on-demand allowed AOL to separate compute and storage jobs. Analyzed data could be retrieved using an AWS S3 client, instead of querying the Hadoop cluster and paying for a cluster running 24/7. The AOL team did a great job designing an EMR cluster orchestrator capable of creating a variable number of transient EMR clusters for processing the data collected during the day. Adopting the “Divide et impera” approach (Latin for “Divide and conquer”), the AOL orchestrator launches chains of EMR clusters, each one responsible for specific kind of jobs (Processing, Extracting, Loading, and Monitoring).

AOL also launches EMR clusters in parallel, to process the smallest data chunks possible in parallel and to reduce dependencies. 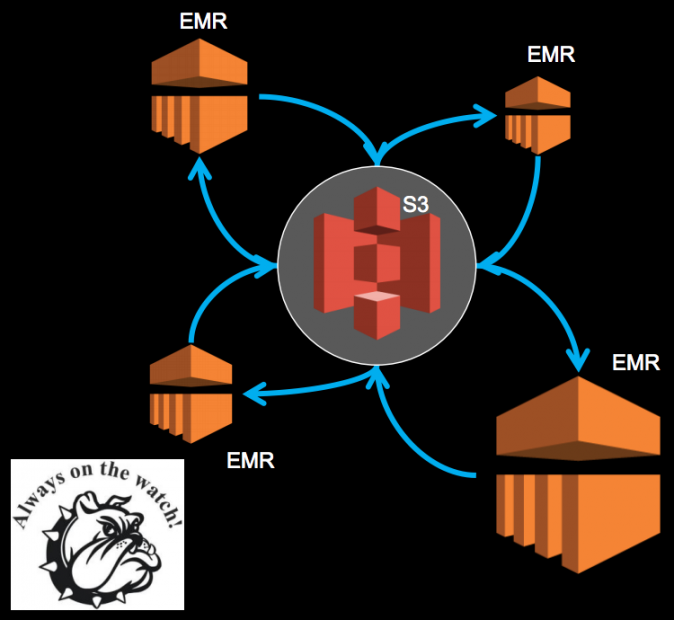 A typical AOL workflow consists of launching several Apache Hive and/or Apache PIG-equipped EMR clusters that read data from one S3 bucket and write to another. Up to 22 datasets are generated and 150 EMR clusters are launched during an “EMR pipeline”. All EMR clusters are checked by the AOL orchestrator that will also (re)launch new EMR clusters in case of error.

TCO analysis: how much does the EMR infrastructure cost?

AOL System Architects tried several infrastructure models and combinations to better understand the significance of service costs. In order to lower their infrastructure TCO, the AOL cluster orchestrator creates clusters that are able to complete assigned jobs in exactly 59 minutes. Why 59? Because any EC2 instance that’s part of an EMR cluster is billed in hourly increments, so terminating an EC2 instance soon after the 60-minute mark will incur two full hours of compute costs.

AOL also uses spot-instances for spinning up their EMR clusters, and they do it using multiple regions and Availability Zones; not only for High Availability but also to benefit from the lowest available spot prices (without competing against themselves). 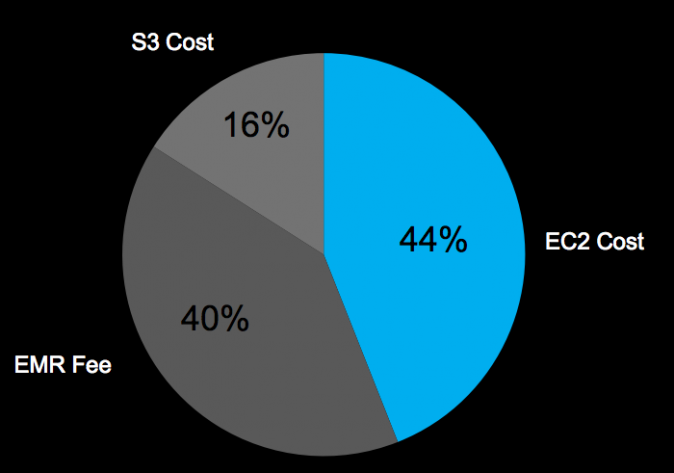 Monitoring and security are important. Therefore, don’t forget to:

In order to better track your costs:

If you’re interested to read on about Amazon EMR, I suggest taking a look at this article Amazon EMR: five ways to improve the way you use Hadoop.