AWS appears to be continuing its strategy of flooding the public cloud market with an endless list of features launched so far in 2017. To understand how 2017 compares to previous years, we analyzed feature announcements posted on the AWS “What’s New” RSS feed since 2014.

Almost as many “What’s New” posts have been made year-to-date 2017 as in all of 2016 when there were 642 AWS “What’s New” posts. Of the AWS product updates posted in 2016, 36% were made in Q4. The Q4 trend probably won’t hold for 2017 but not for the reasons you might think. Expect Amazon to have smoothed out product announcements due to developer discontent with re:Invent’s tsunami of releases this time last year. Nonetheless, we project that teams can expect at least another 400 “What’s New” posts between today and the end of the year. That would make for over 1,000 in 2017. 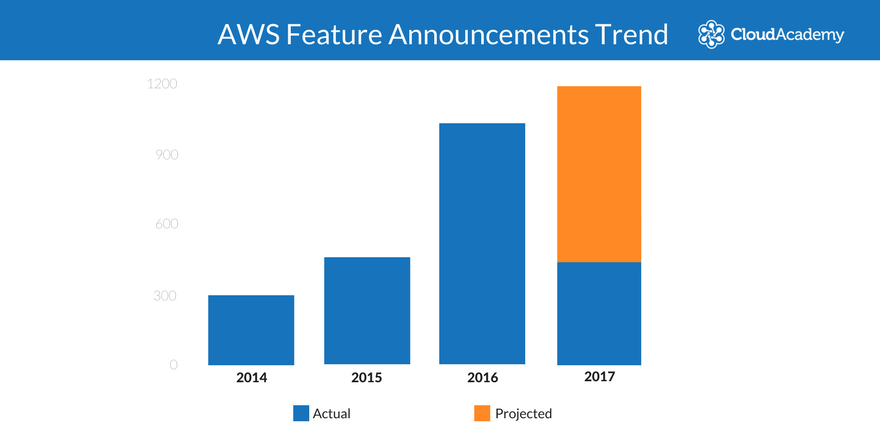 How Can Enterprise Teams Keep Up?

Whether our unit of analysis is a press announcement or a product upgrade, this cadence of updates is problematic for even the nimblest of enterprise cloud computing teams.

The obvious question is, how to separate the noise from the meaningful updates that DevOps and operations teams can deploy in a way that moves the needle for the business? How do you ensure that you’re getting the most of your AWS investment? More broadly, how can you quickly understand which of the many evolutions in the ecosystem actually benefit your team or your company?

At Cloud Academy, we’re seeking answers. We recently covered the new Per-Second Billing update to understand where it will apply and how AWS customers can benefit. We’re also contemplating what’s to come at AWS re:Invent this November as we look more generally towards public cloud offerings in 2018. We’re expecting companies to embrace market solutions that serve to filter out the noise and enable DevOps velocity for the enterprise. So far, the pace of change has outpaced the ability of the median organization faced with finite cloud skills and resources. Waves will be made here in 2018.

Treading water with the 1k+ AWS features this year? Let Cloud Academy guide you and your organization.