Technology keeps moving. In just a few years, we’ve gone from servers running on dedicated hardware, through virtualization, and then cloud computing. And now we’ve reached the container age. As we will see, the Amazon EC2 Container Service (ECS) has made containers a major element of their deployment family. We’ll soon discuss three ways to run Docker containers on AWS, but first a few words about why you would want to.

Traditional servers living in data centers could do one thing at a time. There would often have been one server for Active Directory, another for Exchange, and a third running a database. But it was common for any or all of these servers to have unused excess processing capacity going to waste. Virtualization was developed to make use of that extra capacity. Through virtualization, a single physical server could host multiple virtual servers, allowing for far greater scalability and more efficient resource utilization.

But even virtualization required significant up-front hardware (and software license) investments and couldn’t completely remove the risks of excess capacity. That’s where cloud computing – with its multi-tenancy models, on-demand pricing, and dynamic scalability – proved so powerful.

But modern DevOps practices demand the ability to quickly build servers and ship code to be run in different environments. Welcome to the world of containers: extremely lightweight, abstracted user-space instances that can be easily launched on any compatible server and reliably provide a predictable experience. Containers – of which the best-known example is Docker – are able to achieve all this by capitalizing on the ability to share the Linux kernel of any host.

The DevOps development process depends, in large part, on portability. Even a slight difference between your development, test, and production environments may completely break your application. Traditional development models follow a change management process to solve these kinds of problems. But this process won’t fit in today’s rapid build and deploy cycles. Docker streamlines and automates the software development process. You can simply package an application with references to all its dependencies into standardized containers (defined by plain-text Dockerfiles) that include everything needed to run your application wherever you end up shipping it.

Docker uses a client-server architecture. The docker client talks to a host daemon which both builds and then runs the container.

In this post, we won’t talk all that much about running Docker natively. Instead, we will concentrate on AWS deployments. We’ll explore three ways to do that:

Docker can run anywhere, on a racked server, an old laptop, and perhaps, if you worked at it hard enough, even on a smartphone. So, since it requires only the Linux kernel to run, there’s definitely no reason why it shouldn’t work on a Linux-powered Amazon EC2 instance. Let’s see how we can install and run Docker on Amazon Linux.

At this point, sharing the container with others is easy. Just run this command on any other server, anywhere on the Internet:

Let’s deploy a sample application on a Docker container

When your container grows from one to many, maintenance can become a significant burden. Managing containers at scale requires proper cluster management software. Since “Amazon” and “scale” are like two sides of the same coin, it wasn’t much of a surprise when they created the AWS EC2 Container Service to handle the installation, operation, scaling and general cluster management for you.

Container instances communicate with the ECS service through an “ECS agent.” When you create a new cluster, an Amazon ECS-enabled AMI will be copied into your cluster. 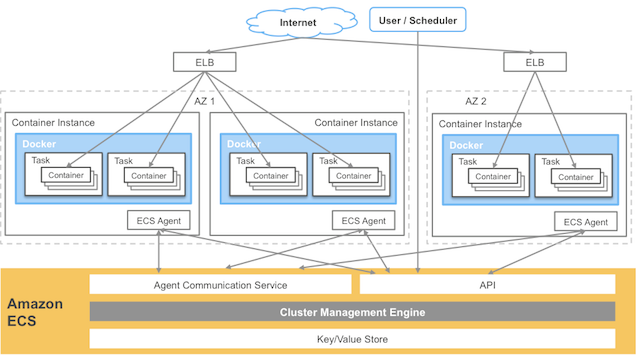 Create a task definition from the sample. You have the option of modifying the parameters (CPU resources or change the port mappings) in the task definition.

You can schedule a task to run once (which is ideal for batch jobs) or create a service to launch and maintain a specified number of copies of the task definition in your cluster. So that the sample application we are running will run continuously, let’s choose “Create a Service.”

Here’s the final step to launch our containers. The more instances you have in our cluster, the more tasks we can give them. Click Review, and Launch. 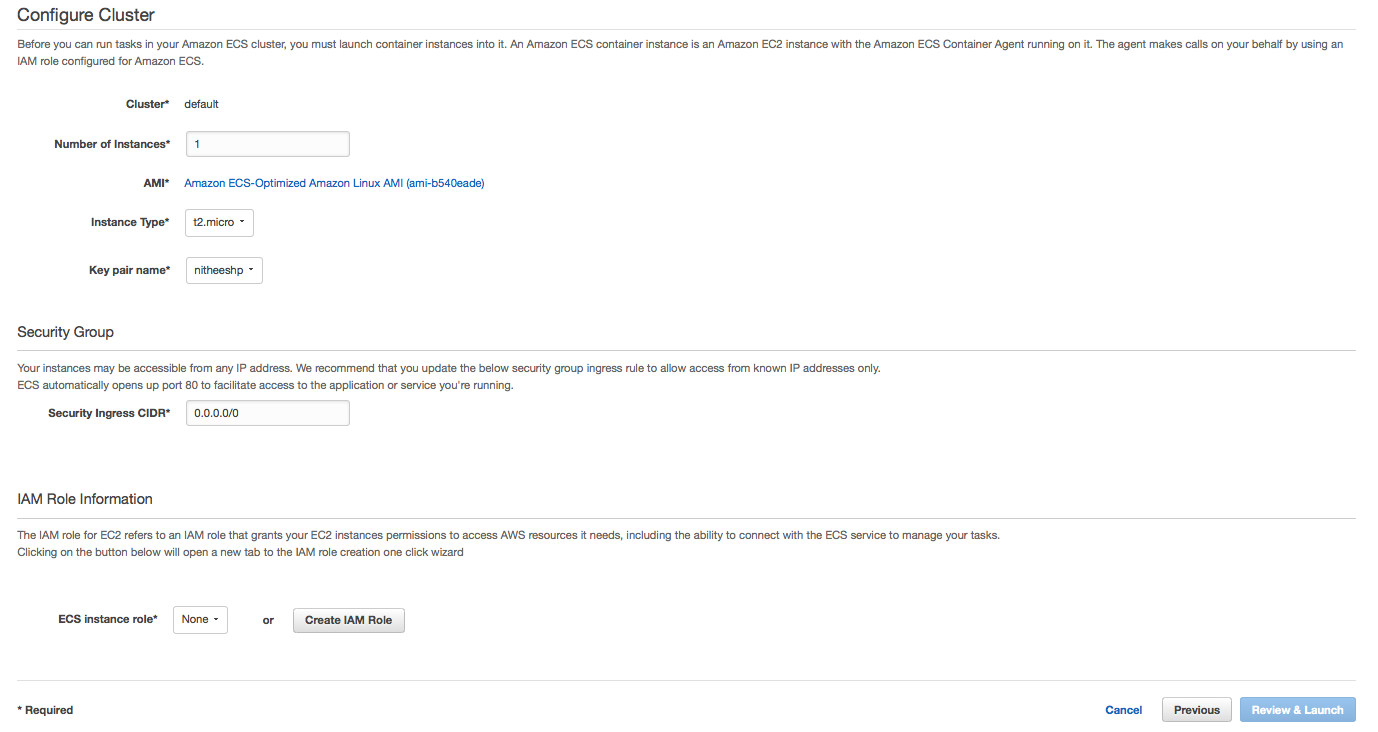 Click on your cluster and at the bottom, you’ll see an external link for your application.

When you click on that link you should be able to see your sample application running in the browser.