DevOps driven solutions that can reduce work cycles and speed up delivery take on greater importance, and properly understanding Cloud DevOps is essential.

It hasn’t been that long since the major concern with developing applications for our customers was making sure our product was both stable and efficient. I’m not going to claim that those two considerations are no longer important, but a 21st Century business model also demands agility and innovation. As the shift to Cloud Computing gains speed, if you’re not constantly growing, you’re falling backward. The DevOps approach can help you achieve that goal, so understanding it is important.

The major bottlenecks for any development life cycle are infrastructure and application deployment and updates. If you can address these processes, I think you’ll be able to more effectively face customers’ continuously changing needs.

Infrastructure deployment was much more costly and cumbersome just a few years back, but Cloud Computing turned all that upside down. Besides making infrastructure provisioning easy and affordable, the public cloud concept has taken over the entire overhead of infrastructure maintenance: using cloud providers like AWS and Azure, it’s a matter of few clicks, and your basic infrastructure is up and running.

Still, though Cloud Computing has reduced the friction of infrastructure, the application development life cycle can still delay your deliverables.

In traditional development environments, once developers are done with a module, they commit their code to the source control version. But the full build still won’t happen until other developers are done writing the code for their modules. Once the build does finally take place across the entire code base, everything is handed over to the testing team…which can take its own sweet time completing various testing rounds. Once done, the application is deployed to UAT (User Acceptance Testing) and then to live production.

This entire cycle, from development to production, can consume a great deal of time due to the need for repeated manual intervention, human errors that can force cycle restarts, and dependency on IT infrastructure and on critical team members.
Beyond that, there is a natural tension between the development and operations teams. Remember: developers are expected to come up with innovative ideas and automate them, while operations admins must make sure the system is stable. So it’s normal for admins to be reluctant to quickly deploy new code before thoroughly testing new builds, but that can slow life cycle development to a crawl.

DevOps exists to solve many of those problems. Let’s learn how that can work.

What is DevOps and how it can improve the application development life cycle?

There are many definitions of DevOps available on the Internet, this is a good place to start:

DevOps (a clipped compound of “development” and “operations”) is a software development method that emphasizes the roles of both software developers and other information-technology (IT) professionals with an emphasis on IT Operations.

DevOps is the practice of operations and development engineers participating together in the entire service life cycle, from design through the development process to production support.

Here’s a visualization of the way IT departments can interact:

I think it’s clear that DevOps is neither a tool nor a technology. Rather, it’s an organizational culture that seeks to facilitate effective communication, collaboration, and integration between developers and operations teams. DevOps doesn’t look at developers and operations as separate entities but tries to bring them together to enable quick and error-free deployments.
What makes this methodology possible? The adoption of a number of clever open source software tools related to source version control, continuous integration, and configuration management. Intelligently integrating those tools into your software life cycle can help you achieve faster deployments and releases, with a better feedback mechanism as a bonus.

Because some of the tools rely on widely distributed components, it’s not so much with DevOps that their greatest benefits will be realized, but with Cloud DevOps. It’s specifically Cloud DevOps that can deliver scalable infrastructure and very agile development environments.

This diagram illustrates how open source tools like Git, CI (Continuous Integration) servers, and the Chef configuration management package can, when used together, help developers automate application deployments in different environments – including the AWS cloud. When properly designed, the entire process requires manual intervention only at initial set up. 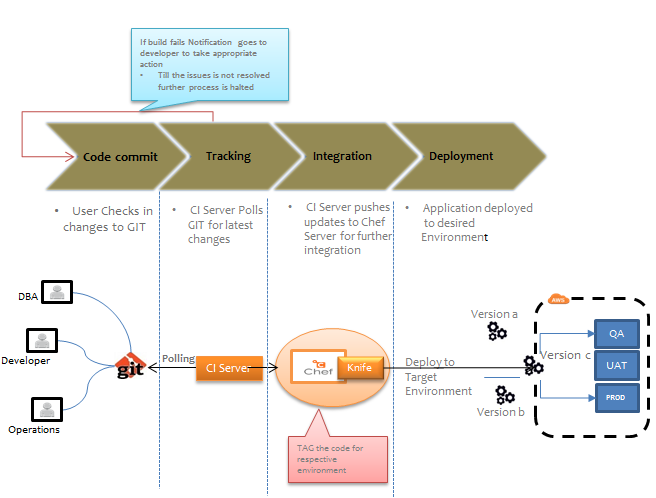 Here are some key characteristics (and benefits) of DevOps:

We’ve seen how DevOps – especially Cloud DevOps – can improve deployment experiences for developers and operations and, ultimately, customer experience. The benefits are very real and they’re certainly no secret.

Have you had experience transitioning to DevOps methodologies? Why not share them in the comments?

If you’re interested in learning more, here are some DevOps courses that may be of interest: